The Menindee Lakes is a chain of shallow ephemeral freshwater lakes connected to the Darling River to form a storage system. The lakes lie in the far west region of New South Wales, Australia, near the town of Menindee.

The Menindee Lakes Water Storage Scheme supplies water to Broken Hill, the lower Darling and to water users along the Murray River in New South Wales, Victoria and South Australia under the Murray-Darling Basin Agreement. Seven of the lakes have been incorporated in an artificially regulated overflow system providing both for flood mitigation and as storage for domestic use, livestock and irrigation downstream. The lakes are also important for waterbirds. 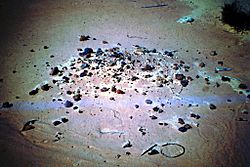 The lakes are located approximately 110 kilometres (68 mi) south-east of Broken Hill in the semi-arid zone on grey clay and duplex soils, and siliceous and calcareous sands of the far west region.

The lakes range in size from 103–15,900 hectares (250–39,290 acres). The largest are Lakes Menindee, Wetherell, Pamamaroo and Cawndilla. These four, with Tandure, Bijijie and Balaka, are part of the Menindee Lakes Water Storage Scheme, with Cawndilla and Menindee also within the Kinchega National Park. Lakes Nettlegoe, Kangaroo, Stir Tank, New and Malta are unregulated. Lake Tandou is managed as irrigated cropland and is no longer subject to flooding.

The shallow margins of the overflow lakes are studded with dead black box trees while the shores are dominated by bluerod and sandhill canegrass.

The Menindee Lakes Storages is a major gated dam, including multiple weir and lake impoundments and a concrete spillway, with six vertical lift gates, across the seven lakes that form part of the Menindee Lakes Water Storage Scheme. The lakes were originally a series of natural depressions that filled during floods. As the flow receded the floodwaters in the natural depressions drained back into the Darling River.

In 1949, work began on building dams, weirs, levees, canals and regulators to catch and retain floodwaters. Major works were completed in 1960 and final completion was in 1968. There were electrical upgrades in 2007. The scheme was built by the New South Wales Water Conservation and Irrigation Commission, to manage river flows, town water supplies and other domestic requirements, irrigated agriculture, industry, and flood mitigation. It has become increasingly important for regulating environmental flows.

Some 423 km2 (163 sq mi) of the lakes and their surrounds, with the exception of Lake Tandou, have been identified by BirdLife International as an Important Bird Area (IBA) because it has supported up to 222,000 waterbirds, including over 1% of the world populations of freckled ducks, grey teals, pink-eared ducks, red-necked avocets, sharp-tailed sandpipers and red-capped plovers. Other waterbirds sometimes using the lakes in large numbers are Australasian shovellers, Australian shelducks, pied cormorants, yellow-billed spoonbills, Eurasian coots and white-headed stilts. Other species recorded in the IBA include Australian bustard, black and pied honeyeaters, chirruping wedgebill and grey falcon.

All content from Kiddle encyclopedia articles (including the article images and facts) can be freely used under Attribution-ShareAlike license, unless stated otherwise. Cite this article:
Menindee Lakes Facts for Kids. Kiddle Encyclopedia.