Mercer is a town in southern Iron County, Wisconsin, United States. The population was 1,732 at the 2000 census. The census-designated place of Mercer and the unincorporated communities of Carter and Manitowish are located within the town.

Mercer identifies itself as the "Loon Capital of the World" to promote tourism. A wildlife study found Mercer had the highest concentration of common loons in the world. In front of the Mercer Chamber of Commerce's information center, there is a 16-foot (4.9 m), 2,000-pound (910 kg) statue named "Claire de Loon". Mercer also hosts an annual "Loon Day" festival, which features an arts and crafts fair, live music and a loon calling contest. 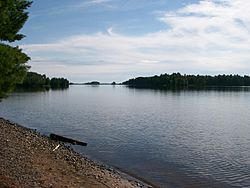 The Turtle-Flambeau Flowage is a major source of summer tourism

There were 820 households, out of which 17.7% had children under the age of 18 living with them, 54.9% were married couples living together, 5.7% had a female householder with no husband present, and 36.7% were non-families. 31.5% of all households were made up of individuals, and 16.5% had someone living alone who was 65 years of age or older. The average household size was 2.11 and the average family size was 2.63.

The Mercer Area Historical Society is housed in the former train station. It contains a small museum of local history. Other buildings include a jail, schoolhouse, barbershop, and a reconstructed caboose.

Mercer is served by the Mercer School District, with about 140 K-12 students in a single school.

All content from Kiddle encyclopedia articles (including the article images and facts) can be freely used under Attribution-ShareAlike license, unless stated otherwise. Cite this article:
Mercer, Wisconsin Facts for Kids. Kiddle Encyclopedia.