Kids Encyclopedia Facts
Not to be confused with The Merry Thoughts.

Merrythought is a toy manufacturing company established in 1930 in the United Kingdom. The company specialises in soft toys, especially teddy bears. It is the last remaining British teddy bear factory to still make its products in Britain and is located at Ironbridge in Shropshire.

The company's site in Ironbridge has a small museum and shop open to the public, and is where the toys are made. The site is a former iron foundry building on the banks of the River Severn, less than half a mile (0.7 km) upstream from the world-famous Iron Bridge itself. The vicinity is known as Dale End, lying at the bottom of the Coalbrookdale valley, and falls within the wider Ironbridge Gorge World Heritage Site.

The origin of the firm's name is uncertain but possibly derives from an archaic word for "wishbone" – the company has used a wishbone as an emblem since 1992. 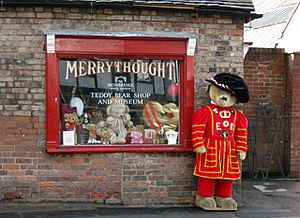 The shop and museum, which first opened in 1988, is one of the visitor attractions in the area. It is run and managed directly by Merrythought, though it used to be part of the Ironbridge Gorge Museums.

The company still uses traditional methods and materials (such as mohair for its bears) to produce a limited range of hand-crafted toys, appealing to the high end of the market. The founder's grandson, Oliver Holmes, ran the business as managing director until his death in 2011; his eldest daughter, Sarah Holmes, has been involved in its management since 2010, and middle daughter Hannah Holmes since 2011, thereby continuing the Holmes family connection. As of 2011, all four shareholders are members of the Holmes family.

The present range includes for the most part traditional and collectable teddy bears (including the company's "Punkie" and "Cheeky" variants), some other soft toy animals. Since the relaunch in 2007 the collectable part of the range consists of numerous special designs, each produced in a limited batch (typically between 75–200 units) and with new designs regularly coming onto the market. Recent commemorative bears include those for the wedding of Prince William and Kate Middleton, the Queen's Diamond Jubilee, and in memory of the late Oliver Holmes.

There is a notable foreign export market for the company's products, with Merrythought teddy bears being sent all over the world, most significantly in Japan, where in recent years a "cult following" of Merrythought Bears has developed; the depreciation of the British pound against the Japanese yen since 2008 has also helped sales there. The recent depreciation of the pound has also helped the company compete in the UK against imports, including those from continental Europe.

Displays of historic and current Merrythought products can be seen at the small shop and museum located at the company's Ironbridge site, which is open seven days a week throughout the year and is free to enter.

Part of the Merrythought site is now rented out to other businesses, as the company has scaled down operations, with many of the factory and associated buildings not in use by Merrythought rented out to other companies. The overall site therefore has become mixed use with office, workshop and retail units, and has been named the Merrythought Village. The Village at present includes the Merrythought company's factory and its teddy bear museum and shop, but is also home to Ironbridge Interiors, Crystal Labyrinth, Ironbridge Fine Arts and Framing, Ironbridge Scenic River Cruises, Admaston Firecraft Centre Ltd, Ironbridge Arts and Antiques Centre and the Ironworkers of Ironbridge. The Ironbridge Brewery was located at the Village until 2014 (it moved to Wellington and has been renamed) and brewed real ale in the building closest to the Severn. A Co-op supermarket opened at the Village in December 2014. The Merrythought site's historic name is the Dale End Works, sometimes still used on postal addresses.

Merrythought was selected by the London Olympic Games organisers in February 2011 to produce the official teddy bears of the London 2012 Olympic and Paralympic games, giving the company a further boost. A range of London 2012 Olympic Games Commemorative Teddy Bears has been created each a Limited Edition of 2,012 pieces. Paralympic and Team GB Teddy Bears have also been produced. All of the Olympic teddy bears are handmade in England Merrythought's Ironbridge factory. Different bears have been produced to mark the Paralympic games. A bear has also been produced specifically for the British Olympic team.

Frequently the company releases 'Special Edition bears' usually with limited numbers. In July 2013 to commemorate the UK Royal baby Prince George, the company has released a special limited edition bear Other Royal owners include The Queen, who was presented with a Merrythought corgi in 1952. Prince Charles was given a specially-made hippo in 1982, while the Queen Mother, Prince William and Zara Phillips also have specially made bears.

Other previous special edition bears include a 2004 Merrythought bear called 'Heathcliff' where only 100 were made, unusually these were made with black mohair rather than the usual gold.

All content from Kiddle encyclopedia articles (including the article images and facts) can be freely used under Attribution-ShareAlike license, unless stated otherwise. Cite this article:
Merrythought Facts for Kids. Kiddle Encyclopedia.