The Mesilla Diversion Dam is located in the Rio Grande about 40 miles (64 km) upstream of El Paso, Texas, about 6 miles (9.7 km) to the south of Las Cruces, New Mexico. It diverts water from the river for irrigation in the lower Mesilla Valley. The dam is owned by the United States Bureau of Reclamation, which built it, and is operated by the Elephant Butte Irrigation District.

The first small canals in the Mesilla Valley were dug in 1841, and more canals were dug after 1848, when Mexico ceded the region to the United States. By 1897, there were five main canals, all north of Chamberino. In 1908, the Leasburg Diversion Dam was completed. Water flow was still unpredictable, with the river often drying up for several months. This changed with the closure of Elephant Butte Dam in 1915, which regulated the flow.

The Mesilla Diversion Dam was completed in 1916. 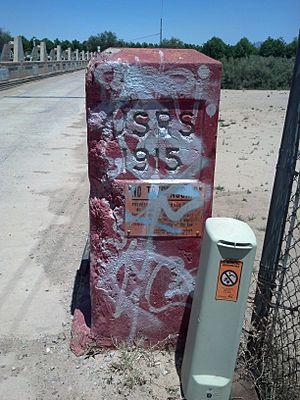 By this time, the canal system served all of the valley.

All content from Kiddle encyclopedia articles (including the article images and facts) can be freely used under Attribution-ShareAlike license, unless stated otherwise. Cite this article:
Mesilla Diversion Dam Facts for Kids. Kiddle Encyclopedia.