The Mexican burrowing toad (Rhinophrynus dorsalis) is the only species in the genus Rhinophrynus and the family Rhinophrynidae of order Anura. Their distribution stretches from south Texas through Mexico, Belize, Guatemala, Honduras, and El Salvador to Nicaragua and Costa Rica. R. dorsalis mostly commonly inhabits the subtropical and tropical dry forests within its range characterized by wet and dry seasons, but may also be found during periods of heavy rain in pastures, cultivated field, roadside ditches or other open areas. The family was once more widespread, including species ranging as far north as Canada, but these died out in the Oligocene.

R. dorsalis for the majority of the year can be found in burrows beneath the surface (fossorial), whose physiology reflects the adaptation to this underground environment. 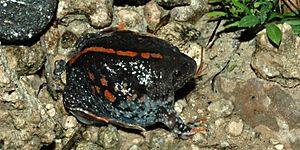 Adults of the Mexican burrowing toad grow to be between 75-85 mm (snout-vent length) or about 3.0 to 3.3 inches. R. dorsalis are sexually dimorphic, with females being larger than males. It is characterized by a short, stout, globular-shaped body and conical-shaped head. The color of its smooth skin ranges from shades of dark-gray to maroon-brown on its top surface, which is covered in irregular spots of pale yellow, orange, and red markings and has a red stripe along the center of its back. Keratinized spades on the inside of each hind foot aid it in digging. The snout is covered in epidermal armor of small keratinous spines and the lips are doubled sealed by secretions from submandibular glands. Its eyes are relatively small, and the tympanum is not visible. Unique among the frogs, the Mexican burrowing toad's tongue is projected directly out the front of the mouth, instead of being flipped out, as in all other frogs as a specialization for eating subterranean arthropods, primarily ants and termites.

R. dorsalis are considered “explosive breeders”, also characteristic of other burrowing Anura, whereby many individuals exit their burrows synchronously and converge upon temporary pools of water. For the majority of the year, R. dorsalis lives underground and only emerges with the first heavy rains of the year. The males then float on the surface of the water, partially submerged, and inflate their bodies while calling that will eventually result in most males mating with females using inguinal amplexus. Although the mating season of explosive breeders is restricted to a short period each year, R. dorsalis has one of the shortest seasons among amphibians of between 1-3 days, after which they will burrow back into the ground once the environment has dried up and remain until the next breeding season. Intraspecific competition between males for females rarely involves agonistic interactions, but instead relies on acoustic communication. Females of R. dorsalis are thought to choose mates based on characteristics of their mating calls, also referred to as advertisement calls. These calls last 1.36 (± 0.12) seconds and are characterized by a single tone that is upward modulated. This call sounds like a loud, low-pitched "wh-o-o-o-a". Preceding the advertisement call are another type of vocalization known as pre-advertisement marked by a single sound only 0.25 (± 0.09) seconds that instead do not modulate. As a newly documented call, the function of this vocalization type is currently unknown but is thought to play a role in aggression or act as a close-range signal for other males.

When the female is laying eggs, both male and female are underwater. Between 6-12 eggs come out of her cloaca successively, whose sticky surfaces will clump together on the bottom surface. The eggs take only a few days to hatch, and the tadpoles develop over one to three months.

The only species, within the only genus of the family Rhinophrynidae, and with over 190 million years of independent evolution, the Mexican burrowing toad is the most evolutionarily distinct amphibian species on Earth today; a fruit bat, polar bear, killer whale, kangaroo and human are all more similar to one another than this species is to any other amphibian.

All content from Kiddle encyclopedia articles (including the article images and facts) can be freely used under Attribution-ShareAlike license, unless stated otherwise. Cite this article:
Mexican burrowing toad Facts for Kids. Kiddle Encyclopedia.