The Miami Children’s Museum is a non-profit educational institution located on Watson Island, in the city of Miami, Florida. 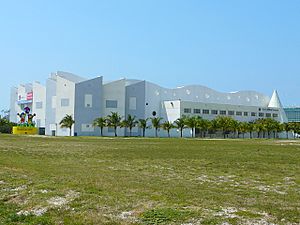 Miami Children's Museum during the day

Founded in 1983, the museum opened its current building on Watson Island to the public on September 7, 2003. The museum was originally titled the "Miami Youth Museum" and was originally located in two shopping malls, the Bakery Center in South Miami, and then relocated to the Miracle Center in Coral Gables.

In September 2003, after 12 years of planning, the Museum opened its new $25 million home on Watson Island near Downtown Miami. Over the past twenty years, they have relocated and expanded their space several times in response to public involvement. In the mid-1990s, planning was initiated among community leaders for the construction of its own stand-alone building.

Miami Children’s Museum was established in 1983 as the Miami Youth Museum. Our first home was a 2,000 square foot facility located in a shopping center in West Kendall.

1987 Visitorship climbs to 18,871. The museum institutes its Community Outreach Program, which reaches 137,100 people.

1988 The museum increases its exhibition space by 2,000 square feet and visitorship grows to 26,165. Community outreach is expanded.

1991 The museum reaches visitor capacity of 47,686, where it remains for five years and the museum receives its first State of Florida Cultural Facilities grant.

1992 The museum’s board plans to build a new facility. A capital campaign is initiated with a $1 million lead gift. The museum receives a prestigious Institute of Museum and Library Services grant.

1996 Pending demolition of the Bakery Center forces the museum to move temporarily to the Miracle Center as fund raising and planning for the new facility continues.

1996 A careful search and a partnership with Miami Dade County lead the museum’s board to secure a site at the Vizcaya Metro-Rail Station.

1997 The Miami Youth Museum changes its name to Miami Children’s Museum to distinguish it from its precursor and clarify its scope.

2000 Neighborhood opposition and the threat of protracted litigation caused the Board of Directors of Miami Children’s Museum to seek a new site for the building of its community treasure. A Leadership Committee to identify a new site was born, chaired by Alan Potamkin and Norman Braman, which raised $8.2 million by the end of 2000.

2001 The plans to build Miami Children’s Museum on a magnificent waterfront site on Watson Island were finalized.

2005 MCM received a grant of $500,000 from the State of Florida Division of Cultural Affairs to support the build-out of our Charter School area, adding a total of 10 new classrooms to our facilities.

2014 The Museum records more than 430,000 visitors through its doors annually with its services now including one of the best pre-schools in Miami, a Charter School, various classes and seasonal camps.

All content from Kiddle encyclopedia articles (including the article images and facts) can be freely used under Attribution-ShareAlike license, unless stated otherwise. Cite this article:
Miami Children's Museum Facts for Kids. Kiddle Encyclopedia.