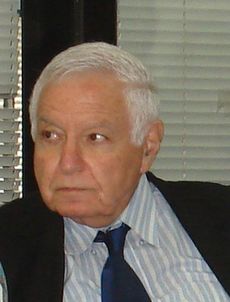 Micha Lindenstrauss (Hebrew: מיכה לינדנשטראוס‎‎‎; 28 June 1937 – 2 May 2019) was a German-born Israeli judge. He was born in Berlin, but moved to Israel before World War II. Lindenstrauss was the State Comptroller between 2005 and 2012. In the Israel Defense Forces, he was a military prosecutor, and later, as a judge in a military tribunal.

All content from Kiddle encyclopedia articles (including the article images and facts) can be freely used under Attribution-ShareAlike license, unless stated otherwise. Cite this article:
Micha Lindenstrauss Facts for Kids. Kiddle Encyclopedia.