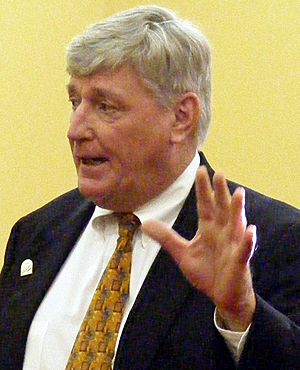 Born in Baltimore, Maryland, Busch had been a member of the House since 1987. He represented District 30A, which is made-up of Anne Arundel County, including the state capital of Annapolis.

Busch died at a hospital in Baltimore from problems caused by pneumonia following liver surgery on April 7, 2019, aged 72.

All content from Kiddle encyclopedia articles (including the article images and facts) can be freely used under Attribution-ShareAlike license, unless stated otherwise. Cite this article:
Michael E. Busch Facts for Kids. Kiddle Encyclopedia.