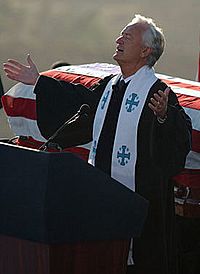 Wenning delivering the invocation at the funeral of Ronald Reagan, June 2005

Michael Harold Wenning (July 5, 1935 – June 28, 2011) was an South African-born American Presbyterian minister. From 1969 to 1977, he was pastor of a Presbyterian church in Durban, South Africa. He was known for performing President Reagan's state funeral.

Wenning was born in Cape Town, South Africa. He studied at Texas Christian University and at New York University.

From 1969 to 1977, he was pastor of a Presbyterian church in Durban, South Africa. In 1977 he returned to the United States where he worked for the next three decades as a pastor in various Presbyterian Church (U.S.A.) congregations, including one in Pittsburgh, Pennsylvania.

Wenning died at his home in Mission Viejo, California from kidney failure caused by leukemia, aged 75.

All content from Kiddle encyclopedia articles (including the article images and facts) can be freely used under Attribution-ShareAlike license, unless stated otherwise. Cite this article:
Michael Wenning Facts for Kids. Kiddle Encyclopedia.