Death and state funeral of Ronald Reagan facts for kids 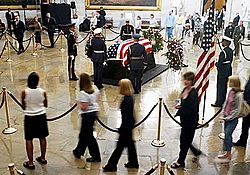 On June 5, 2004, Ronald Reagan, the 40th President of the United States, died after having suffered from Alzheimer's disease for almost 10 years. A seven-day state funeral for Reagan was held shortly after his death.

After Reagan's death his body was taken from his Bel Air, Los Angeles, California home to the Gates, Kingsley and Gates Funeral Home in Santa Monica, California to prepare the body for burial. On June 7, Reagan's casket was taken by a hearse. The funeral was performed by the Reagan's Presbyterian minister Michael Wenning.

It was displayed at the Ronald Reagan Presidential Library in Simi Valley, California, then flown to Washington, D.C. on June 9 for a service, public viewing and tributes at the U.S. Capitol. 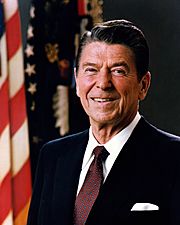 After lying in state for thirty-four hours in the Capitol Rotunda, a state funeral service was held at the Washington National Cathedral on June 11.

On the same day, President George W. Bush declared a national day of mourning. Bush was in Paris when Reagan died. Later that day, after the service, Reagan's casket was taken back to California for burial at the Reagan Presidential Library. Bush later said the following during his press-conference in Paris:

All content from Kiddle encyclopedia articles (including the article images and facts) can be freely used under Attribution-ShareAlike license, unless stated otherwise. Cite this article:
Death and state funeral of Ronald Reagan Facts for Kids. Kiddle Encyclopedia.