Microcotyle archosargi is a species of monogenean, parasitic on the gills of a marine fish. It belongs to the family Microcotylidae. It was first described by MacCallum in 1913 based on ten specimens. Hargis (1956) pointed out that the description and figures given by MacCallum were poor in details.

Microcotyle archosargi has the general morphology of all species of Microcotyle, with a flat body, comprising an anterior part which contains most organs and a posterior part called the haptor. The haptor is symmetrical and bears a number of clamps, arranged as two rows, one on each side. The clamps of the haptor attach the animal to the gill of the fish. There are also two small buccal suckers at the anterior extremity. The digestive organs include an anterior, terminal mouth, a muscular pharynx, and a posterior intestine with two lateral blind-ending branches. Each adult contains male and female reproductive organs. The reproductive organs include an anterior genital atrium, with spines, a dorsal vagina, a single ovary, and a number of testes which are posterior to the ovary.

In 2011, Kritsky and Bakenhaster provided supplementary observations for M. archosargi based on examination of museum specimens and other specimens collected on Archosargus probatocephalus from Florida. The species was also redescribed by Mendoza-Franco et al. in 2018, from Archosargus rhomboidalis, including a drawing of the genital atrium. These authors also provided the first molecular data (28S ribosomal RNA) for Microcotyle archosargi. 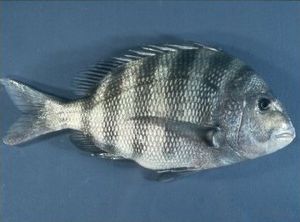 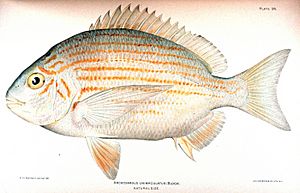 The sheep's head Archosargus probatocephalus (Sparidae) is the type-host of Microcotyle archosargi. The species has been first described from fish caught off New York fishmarket. Although MacCallum collected his fish at the fish market his host record is probably correct. It has also been recorded from the type-host from Florida and Mexico and from another sparid host, the western Atlantic seabream Archosargus rhomboidalis.

All content from Kiddle encyclopedia articles (including the article images and facts) can be freely used under Attribution-ShareAlike license, unless stated otherwise. Cite this article:
Microcotyle archosargi Facts for Kids. Kiddle Encyclopedia.