Milecastle 27 (Low Brunton) was a milecastle of the Roman Hadrian's Wall. It was located on the line of Hadrian's Wall, approximately midway between the A6079 and the River North Tyne. Its remains survive as a slight squarish platform with a maximum height of 0.4 metres (1.3 ft), but it is poorly defined to the north and east.

Milecastle 27 was a long-axis milecastle with unknown gateway type. Such milecastles were thought to have been constructed by the Legio XX Valeria Victrix who were based in Deva Victrix (Chester).

The Milecastle was set in the Broad Wall which, at this point had a clay core with facing stones set in mortar, and unusually broad foundations (varying between 3.35 metres (11.0 ft) and 3.5 metres (11 ft)).

Each milecastle on Hadrian's Wall had two associated turret structures. These turrets were positioned approximately one-third and two-thirds of a Roman mile to the west of the Milecastle, and would probably have been manned by part of the milecastle's garrison. The turrets associated with Milecastle 27 are known as Turret 27A and Turret 27B. 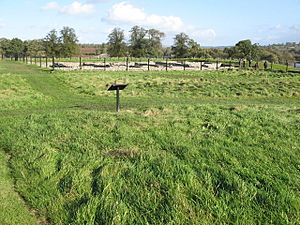 The site of Turret 27A at Chesters Fort

Turret 27A was demolished soon after construction to allow the construction of Cilurnum (Chesters Roman Fort). Therefore, only its foundations exist, underlying the remains of the fort. They are located immediately to the east of the northwest corner of the fort's principia (headquarters block). The foundations measured 3.36 metres (11.0 ft) square. The remaining foundations consist of a single layer of clay and massive cobbles.

No traces of Turret 27B remain. The position is calculated.

There is no public access to Milecastle 27, or the calculated site of Turret 27B.

Access to Turret 27A is with English Heritage admission to Chesters Roman Fort.

All content from Kiddle encyclopedia articles (including the article images and facts) can be freely used under Attribution-ShareAlike license, unless stated otherwise. Cite this article:
Milecastle 27 Facts for Kids. Kiddle Encyclopedia.