Milecastle 66 (Stanwix Bank) was a milecastle on Hadrian's Wall . 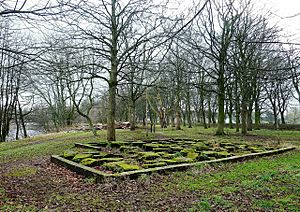 Dredged remains of the Roman bridge in Bitts Park, Carlisle

Milecastle 66 was situated on the north, Stanwix, side of the River Eden in Carlisle. The site is near the cricket ground. In Roman times there was a bridge crossing the Eden at this point. On the south side of the river was the Roman fort and town known as Luguvalium. In the 16th century, William Camden noted remains of the bridge as "within the chanell of the river, mighty stones the remaines thereof." When the Eden was dredged in 1951, nearly 100 stones were recovered. Most of these dredged stones can be seen today in Bitts Park.

Milecastle 66 was seen by Thomas Pennant in 1772, when he passed through Carlisle on his way to Scotland. He describes the milecastle as "vestiges of some dikes describing a small square, the site of a fort to defend the pass". There are no visible remains of the milecastle today.

Each milecastle on Hadrian's Wall had two associated turret structures. These turrets were positioned approximately one-third and two-thirds of a Roman mile to the west of the Milecastle, and would probably have been manned by part of the milecastle's garrison. The turrets associated with Milecastle 66 are known as Turret 66A and Turret 66B . None of the turrets between Milecastles 59 and 72 were sought or identified prior to 1961, and the exact locations of turrets 66A and 66B have not been found.

All content from Kiddle encyclopedia articles (including the article images and facts) can be freely used under Attribution-ShareAlike license, unless stated otherwise. Cite this article:
Milecastle 66 Facts for Kids. Kiddle Encyclopedia.