Miles Smith Farm is a family-owned grass-fed beef farm located on Whitehouse Road (New Hampshire Route 106) in Loudon, New Hampshire, United States. Formerly a working family farm and stoneworks, its 36 acres (15 ha) have a panoramic view of the Merrimack Valley to the southwest.

Miles Smith Farm and neighboring grazing fields supports a herd of Scottish Highland and Angus that are chosen because they are a hardy breed and do well in rugged nature of central New Hampshire. The farm also serves as an educational resource to local schools and clubs by practicing rural land use that is environmentally, economically and culturally sustainable. Visitors may enjoy the walking trails, children’s farmyard, burial grounds, cattle rides and special events.

Miles Smith first farmed the area in 1830. He was a stone mason by trade, helping the neighboring Shakers with their stonework and providing food from his dairy cattle, goats, and pigs. Smith knew the area well and farmed extensively, becoming the town of Loudon's hog reeve and field driver. Smith now resides in the cemetery on the farm along with other who have farmed the area over the years.

In 1918, Sarah Adeline Whitehouse buy the property. Whitehouse is a midwife who helped to bring over 45 children into the world and she was also known as the "best shot in Loudon" and filled the farmhouse with deer antlers.

In 2002, the current iteration of Miles Smith Farm is founded with just two pregnant Scottish Highland cows. In 2005, the first beef sales were made at a local cooperative market and a solar-powered store on the farm property opened in 2011.

Today, the farm has recovered over 200 acres of off-pasture farmland, including land belonging to St. Paul's School. St. Paul's strongly supports local agriculture and the local economy by making some of its unused land available to local farmers. The land is managed by the New Hampshire Audubon and also provides a natural habitat for grassland birds such as grasshopper sparrows and eastern meadowlarks.

Miles Smith Farm is participating in a program to extend the period of time when their cattle can graze from four to six months a year up to eight months a year by allowing the cattle to feed on turnips during the colder months. 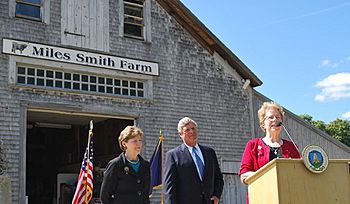 Miles Smith Farm sells their beef directly to the consumer in various farmers' markets around the state, and have been featured by New Hampshire Magazine as a local food supplier. Their products are also available at many Hannaford Brothers Company grocery stores throughout New Hampshire.

A retail store is located on the grounds of the farm and was outfitted with a solar energy system to heat and power the store. The solar array was part of a grant from the U.S. Department of Agriculture and funded by the department's Rural Energy for America Program to give a boost to farmers and businesses for projects that increase efficiency and decrease impacts.

In August 2014, the United States Department of Agriculture awarded the farm a $127,000 grant to produce and market local burgers made from a blend of grass-fed beef and pork. The grant was part of the 2008 Farm Bill given to nearly farms 250 in the United States to help farmers generate new products, create and expand marketing opportunities, and increase income.

All content from Kiddle encyclopedia articles (including the article images and facts) can be freely used under Attribution-ShareAlike license, unless stated otherwise. Cite this article:
Miles Smith Farm Facts for Kids. Kiddle Encyclopedia.