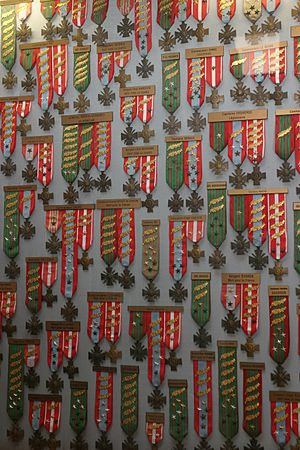 Wall of Medals in the French Foreign Legion Museum

A military decoration is an award, usually a medal that consists of a ribbon and medallion given to an person for either gallantry, or outstanding service or achievement.

All content from Kiddle encyclopedia articles (including the article images and facts) can be freely used under Attribution-ShareAlike license, unless stated otherwise. Cite this article:
Military orders, awards and decorations Facts for Kids. Kiddle Encyclopedia.