Millers Run is a tributary of Shamokin Creek in Northumberland County, Pennsylvania, in the United States. It is approximately 4.1 miles (6.6 km) long and flows through Ralpho Township. The watershed of the stream has an area of 5.48 square miles (14.2 km2). The stream is not impacted by mining and is not designated as an impaired waterbody. It is a small stream near the lower Shamokin Creek watershed. A number of bridges have been constructed over it. The watershed of Millers Run is designated as a Coldwater Fishery and a Migratory Fishery. 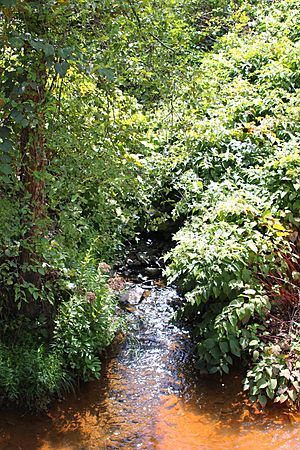 Millers Run is an unimpaired waterbody, as are all other streams in its watershed. It is not impacted by mining.

In April 1975, the specific conductance of Millers Run was measured to be 71 micro-siemens per centimeter. The concentration of water hardness in the stream was 22 milligrams per liter (0.022 oz/cu ft).

The watershed of Millers Run has an area of 5.48 square miles (14.2 km2). The stream is entirely within the United States Geological Survey quadrangle of Shamokin. The watershed borders the lower Shamokin Creek watershed. It is in the southeastern part of the northern part of the creek's drainage basin.

The drainage basin of Millers Run is designated as a Coldwater Fishery and a Migratory Fishery. Some aquatic life exists within the stream. It has historically contained a healthy population of aquatic life.

All content from Kiddle encyclopedia articles (including the article images and facts) can be freely used under Attribution-ShareAlike license, unless stated otherwise. Cite this article:
Millers Run Facts for Kids. Kiddle Encyclopedia.