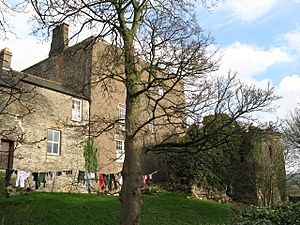 Millom Castle is an ancient building at Millom in Cumbria. It is a Grade I listed building and scheduled ancient monument.

The Hudlestones took an active part in England's regional warfare. In the Wars of the Roses, Sir John Hudlestone fought on the Yorkist side, being present at Blore Heath in 1459, and also Bosworth in 1485. In 1460 Millom Castle was captured by Lancastrian forces. After the accession of Henry VII, Sir John and his son Henry secured a pardon and retained the estate. In the English Civil War of the 1600s, Sir William Hudlestone was a leading Royalist colonel in Cumberland and Lancashire. He was defeated by Parliamentarian forces, and Millom Castle damaged by cannon fire in 1644. Heavy fines exacted by victorious Parliament began the slide of the Hudlestons into debt.

By 1739 the castle walls were in dilapidated condition. In 1748, Elizabeth Huddleston sold the castle to Sir James Lowther of Whitehaven. The gatepiers were added in the 17th or 18th century. The great tower is now used as a farmhouse.

All content from Kiddle encyclopedia articles (including the article images and facts) can be freely used under Attribution-ShareAlike license, unless stated otherwise. Cite this article:
Millom Castle Facts for Kids. Kiddle Encyclopedia.