Milltown (Irish: Baile an Mhuilinn) is a suburb on the southside of Dublin, Ireland. The townland got its name well before the 18th or 19th century. Both Milltown and Clonskeagh were "Liberties" of Dublin, following the English invasion and colonisation in 1290. Milltown was the site of several working mills on the River Dodder and is also the location of the meeting of the River Slang with the Dodder.

A mill race was taken from just above the weir located 100m downstream from the 'Nine Arches' viaduct. It ran beside what is now the Islamic Centre towards the mill which was located in what is now Dodder Park. The remnants of this mill can still be seen. 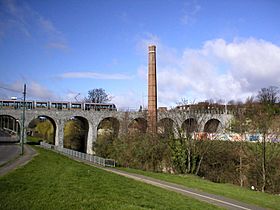 Milltown is marked by a spectacular 19th century railway bridge across the river, which was part of the Harcourt Street railway line which ran from Harcourt Street to Bray. On 30 June 2004, the bridge was re-opened for the Luas light rail system which runs from St. Stephen's Green to Bride's Glen. This bridge, and sometimes the area immediately surrounding it, became known informally as the 'Nine Arches'. Milltown railway station opened on 1 May 1860 and finally closed on 31 December 1958.

All content from Kiddle encyclopedia articles (including the article images and facts) can be freely used under Attribution-ShareAlike license, unless stated otherwise. Cite this article:
Milltown, Dublin Facts for Kids. Kiddle Encyclopedia.