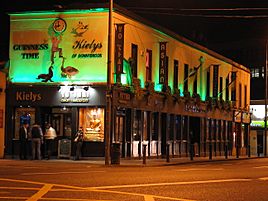 Donnybrook (Irish: Domhnach Broc, meaning The Church of Saint Broc) is a district of Dublin, Ireland. It is situated on the southside of the city, in the Dublin 4 postal district, and is home to the Irish public service broadcaster Raidió Teilifís Éireann (RTÉ). It was once part of the Pembroke Township. Its neighbouring suburbs are Ballsbridge, Sandymount, Ranelagh and Clonskeagh. It is also a civil parish mainly situated in the old barony of Dublin. 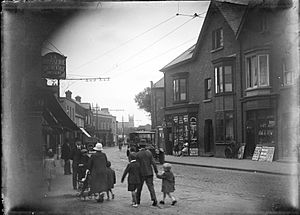 Donnybrook Road in 1927, with the spire of Donnybrook Church visible in the distance.

Donnybrook Fair dates from a charter of King John of England in 1204 and was held annually until 1866. It began as a fair for livestock and agricultural produce but later declined, growing into a more of a carnival and fun fair. Drunkenness, fighting, and hasty marriages became common place and the people of Donnybrook were anxious that it should cease. Eventually, the fair's reputation for tumult was its undoing. From the 1790s on there were campaigns against the drunken brawl the fair had become. After a good deal of local fund raising, the patent was bought by a group of prominent residents and clergy, bringing about its demise. The Fair took place on lands now occupied by Donnybrook Rugby Ground and the Ever Ready Garage. The word donnybrook has since entered the English language to describe a rowdy brawl.

Donnybrook Castle was an Elizabethan mansion and residence of the Ussher family. James Ussher was appointed Archbishop of Armagh in the Church of Ireland by Queen Elizabeth I of England. The mansion was replaced in 1795 by the existing Georgian house. It is now occupied by the Religious Sisters of Charity.

Donnybrook Graveyard dates back to the 8th century and was once the location of a church founded by St Broc. It was also the site of Catholic and Protestant churches, both called St Mary's. Those buried in it include Dr. Bartholomew Mosse, the founder of the Rotunda Hospital, Sir Edward Lovett Pearce, architect of the Irish Houses of Parliament on College Green and Dr. Richard Madden, biographer of the United Irishmen. It is possible that the wall on the south side of the cemetery is the oldest man made structure still existing in Donnybrook. The brick chimney behind the cemetery was built on the site of a former marble works and later served as a Magdalene laundry.

The river Dodder runs through Donnybrook and at one time there was a ford here. It is subject to periodic serious flooding and in 1628 one of the Usshers of Donnybrook Castle was drowned while trying to cross.

It is a civil parish consisting of sixteen townlands. All but four of these townlands are situated in the Barony of Dublin. Donnybrook is the single biggest parish in that barony. The most southerly townlands, Annefield, Simmonscourt and Priesthouse, belong to the barony of Rathdown. The smallest of these, Annefield, is itself an enclave of Simmonscourt which gives its name to a pavilion of the Royal Dublin Society. Today, the majority of Priesthouse is occupied by Elm Park Golf Club and the studios of RTÉ. The remaining townland of Sallymount - the parish's most westerly point - is in the barony of Uppercross.

The television and radio studios of the national broadcaster, RTÉ, are located in Priesthouse, Donnybrook.

Donnybrook is in the Dáil Éireann constituency of Dublin South-East and the Pembroke-Rathmines local electoral area of Dublin City Council.

Donnybrook is the traditional home of rugby union in Leinster. The headquarters of the Irish Rugby Football Union Leinster Branch is located opposite Donnybrook Stadium, where the professional Leinster team played their home games until recently. Kiely's pub in Donnybrook village is a traditional social point for rugby fans. Most Leinster Schools Rugby Senior Cup games are hosted in Donnybrook Stadium. Some Junior Cup ties are also hosted on the grounds.

Belmont Football Club has its home ground in Herbert Park.

Merrion Cricket Club is located in Donnybrook, off Anglesea Road and backing on to the Dodder.

All content from Kiddle encyclopedia articles (including the article images and facts) can be freely used under Attribution-ShareAlike license, unless stated otherwise. Cite this article:
Donnybrook, Dublin Facts for Kids. Kiddle Encyclopedia.