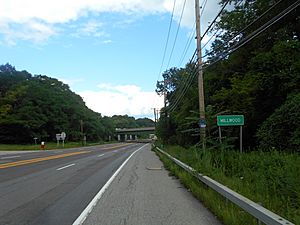 Millwood is a hamlet located in the town of New Castle, New York in Westchester County. It was originally settled as Sarlesville. The area now known as Millwood appears on 19th century maps as Merritt's Corners (now the intersection of NY 100 and NY 120) and Rockdale Mills (close to what is now the Briarcliff Manor border). As of the 2000 census, the community had a population of 1,210.

Sarles' Tavern, also known as Granite House, was added to the National Register of Historic Places in 1979.

All content from Kiddle encyclopedia articles (including the article images and facts) can be freely used under Attribution-ShareAlike license, unless stated otherwise. Cite this article:
Millwood, New York Facts for Kids. Kiddle Encyclopedia.