Chappaqua is a hamlet and census-designated place in the town of New Castle, in northern Westchester County, New York. It is on 0.45 square miles (1.2 km2) of land on the east bank of the Hudson River, about 30 miles (50 km) north of New York City. The hamlet is served by the Chappaqua station of the Metro-North Railroad's Harlem Line. In the New York State Legislature it is within the New York State Assembly's 93rd district and the New York Senate's 40th district. In Congress the village is in New York's 17th District.

Chappaqua was founded by a group of Quakers in the 1730s and was the home of Horace Greeley, New-York Tribune editor and U.S. congressman. Since the late 1990s, President Bill and Secretary of State Hillary Clinton have lived there.

In the early 1730s a group of Quakers moved north from Purchase, New York, to settle in present-day Chappaqua. They built their homes on Quaker Street and held their meetings at the home of Abel Weeks. Their meeting house was built in 1753 and still holds weekly meetings each Sunday. The area around the meeting house, known as Old Chappaqua Historic District, was added to the National Register of Historic Places in 1974. Horace Greeley's home, known as Rehoboth and built by Greeley himself, still stands in Chappaqua. It is also listed on the National Register of Historic Places along with Chappaqua Railroad Depot and Depot Plaza, Church of Saint Mary the Virgin and Greeley Grove, and the Greeley House.

Various spellings were used for the name they heard Native Americans use for their valley and hillside. It was an Algonquian word, shah-pah-ka, and it meant "the rustling land" or "the rattling land," or a place where nothing is heard but the rustling of the wind in the leaves. The Quakers spelled it Shapiqua, Shapaqua, Shapequa, Shappaqua, and, finally, Chappaqua. Their meeting was often referred to as the Shapequa Meeting as early as 1745.

On March 18, 1791, the government of New York decided to split the overly large town of North Castle (jokingly called "the two saddlebags") into two smaller towns, one of which was named New Castle. The border was drawn from the southwest corner of Bedford to the northeast edge of Mount Pleasant. New Castle's borders have remained the same since 1791, except for a small piece of land received from Somers in 1846 and the secession of Mount Kisco in 1978.

Chappaqua had great streams such as the Saw Mill River and Roaring Brook. These bodies of water powered mills to crush corn and press oil from beans. The eastern half of Chappaqua was very suitable for farming. The majority of the Quaker settlers of Chappaqua were farmers. The popular farming industry also helped give way to Chappaqua's high milk production. Other popular industries from Chappaqua included shoes, hardware, vinegar, pickles, eyeglasses, and furniture. Many early homes and businesses were demolished in the 1904 Chappaqua tornado.

In 1846 when the New York and Harlem Railroad extended through Chappaqua, business became centered on the new train station. These businesses included a hotel, livery stables, a public library, and various stores and small factories. The railroad enabled commuters to travel to New York City and back each day.

As of the 2010 census, following a major revision to the delineation of its boundaries by the Census Bureau, the population was 1,436. At the 2000 census, with very different census-defined boundaries, Chappaqua had a population of 9,468.

There were 3,118 households out of which 52.1% had children under the age of 18 living with them, 79.1% were married couples living together, 5.6% had a female householder with no husband present, and 13.8% were non-families. 11.6% of all households were made up of individuals and 4.8% had someone living alone who was 65 years of age or older. The average household size was 3.03 and the average family size was 3.27.

Nationwide, Chappaqua ranks 42nd among the 100 highest-income places in the United States (with at least 1,000 households). In 2008, CNNMoney listed Chappaqua fifth in their list of "25 top-earning towns." Chappaqua 2007 estimated median household income was $198,000. 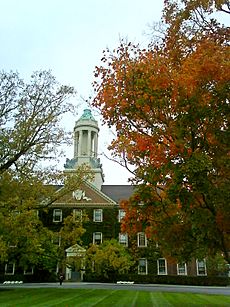 All content from Kiddle encyclopedia articles (including the article images and facts) can be freely used under Attribution-ShareAlike license, unless stated otherwise. Cite this article:
Chappaqua, New York Facts for Kids. Kiddle Encyclopedia.