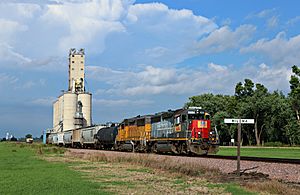 Miloma was originally called Prairie Junction, and under the latter name was founded in about 1879 when the railroad was extended to that point. The present name of the community is a double contraction, Milwaukee and Omaha, from the names of two railroads, the Chicago, Milwaukee & Saint Paul and the Chicago, Minneapolis & Omaha. A post office was established under the name Prairie Junction in 1881, the name was changed to Miloma in 1906, and the post office closed in 1930.

All content from Kiddle encyclopedia articles (including the article images and facts) can be freely used under Attribution-ShareAlike license, unless stated otherwise. Cite this article:
Miloma, Minnesota Facts for Kids. Kiddle Encyclopedia.