Miraitowa and Someity facts for kids 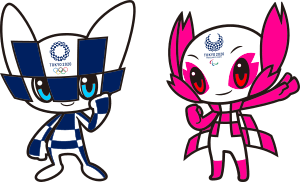 The checkered design on both mascots was inspired by the Tokyo 2020 official logo, while Someity's pink design was inspired by cherry blossoms. Both fictional characters have various superpowers, such as teleportation.

Created by Japanese artist Ryo Taniguchi, the mascots were selected from a competition process which took place in late 2017 and early 2018. A total of 2,042 candidate designs were submitted to the Tokyo 2020 Organising Committee, which then selected three pairs of unnamed mascot designs from the batch to present to Japanese elementary school students for the final decision. The results of the selection were announced on 28 February 2018, and the mascots were named on 22 July 2018. Miraitowa is named after the Japanese words for "future" (未来code: ja is deprecated , mirai) and "eternity" (永久code: ja is deprecated , towa), and Someity is named after someiyoshino, a type of cherry blossom. Someity's name also echoes the English phrase "so mighty". The mascots are expected to help finance the Tokyo Games through merchandising and licensing deals.

In late 2017 and early 2018, the Tokyo 2020 Organising Committee held a competition to determine the design of the 2020 mascots. A total of 2,042 design submissions were accepted between 1 August and 14 August 2017. The entries were then subjected to a series of format and design examinations led by media specialists and the Organising Committee's Mascot Selection Panel to determine whether they "would appeal to elementary school-aged children" and whether they "amply reflected the spirit of the Tokyo 2020 Games Vision".

Pair B, created by Kana Yano

The chosen mascots were announced without names on 28 February 2018. The winning entry was candidate pair A, created by Ryo Taniguchi. The Mascot Selection Panel held a vote on a shortlist of proposed names on 28 May 2018, and names with the most votes were subjected to a trademark verification process before they became official. The names of the mascots, Miraitowa and Someity, were announced when the mascots made their formal debut at a press event on 22 July 2018.

Miraitowa, the Olympic mascot, is a figure with blue-checkered patterns inspired by the Games' official logo. It is intended to embody "both old tradition and new innovation". The character has a "strong sense of justice" and is described as "very athletic". It has the ability to teleport anywhere instantly. Miraitowa's name is a combination of the Japanese words "future" (未来code: ja is deprecated , mirai) and "eternity" (永久code: ja is deprecated , towa). According to the Tokyo 2020 organizers, the name "was chosen to promote a future full of eternal hope in the hearts of people all over the world". 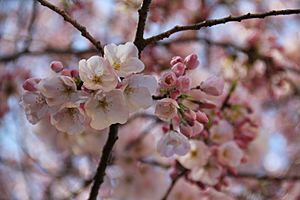 Flowers of the cherry blossom Prunus × yedoensis (Japanese: 染井吉野), the namesake of the Paralympic mascot

Someity, the Paralympic mascot, is a figure with pink-checkered patterns inspired by cherry blossoms and also the Games' official logo. The character is described as "usually calm" but can become "very powerful when needed". The character has the ability to fly using its checkered cape and to send telepathic messages using its cherry blossom-shaped antennae. It can also "talk to stones and the wind" and move objects by looking at them. Someity is named after someiyoshino, a type of cherry blossom, and it is also intended to refer to the English phrase "so mighty".

Although the two mascots have conflicting personalities, they nonetheless have a strong friendship and respect for each other. According to their fictional backgrounds, Miraitowa and Someity "live in the digital world", and through the Internet, they can transport themselves between the digital world and the real world. According to Sadashige Aoki, an advertising theory professor at Hosei University, the mascots follow a Japanese tradition of "creating personalized characters out of nature — mountains, rivers, animals and plants", as well as a "tradition of animism, a belief that every natural thing has a soul".

Miraitowa and Someity at their launch with kids in Japan

The mascots were designed by Japanese artist Ryo Taniguchi, who lives in the Fukuoka Prefecture in southern Japan. Taniguchi was persuaded by his father, who is also an illustrator, to study art at Cabrillo College in California. He has illustrated English-language textbooks for Japanese children. Taniguchi was uninvolved in the naming of the mascots, though he did attend a screening at which various naming proposals were introduced. As part of the agreement to use the mascots, Taniguchi transferred intellectual property rights to the mascots to the Olympic and Paralympic committees, and as a result, he will not receive any royalty payments from mascot-related licensing. 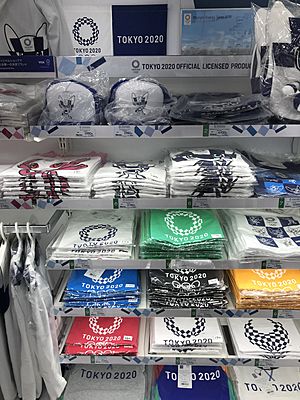 Official merchandising for Tokyo 2020, some of which include Miraitowa and Someity

The mascots are expected to generate revenue to help finance the Tokyo Games. An Olympic official expected the mascots to generate $130 million (¥14.4 billion) in revenue from licensing and merchandising. The organizers of Tokyo 2020 had been criticized for its budget management. According to Reuters, a 2016 study found that overall expenses for the Olympics could be "four times the initial estimate made in the bid process". Tokyo 2020 must transfer intellectual property rights to the mascots to the International Olympic Committee and the International Paralympic Committee after the Games are concluded, which would prevent Tokyo from licensing and developing the mascots after the Games are over.

Plush dolls of Miraitowa and Someity will be attached to the bouquets given to Olympic and Paralympic medalists at Tokyo 2020 as part of their design by the Nippon Flower Council.

On 22 July 2019, the organizers of the 2020 Summer Olympics announced that robotic automatons of Miraitowa and Someity, among other robots, are expected to be included during the Games. According to the Los Angeles Times, the robots are "programmed to show facial expressions as they wave at and shake hands with athletes and fans". The Tokyo 2020 organizing committee plans to use the mascots primarily to promote the Games and greet visitors and athletes, attempting to increase engagement with children. The robots were also featured as part of a "1 Year to Go" press event on 22 July 2019 at an Olympic venue in Tokyo. The robots were included as part of another press event on 18 November 2019 at a Japanese elementary school. The robots' eyes can change to display hearts, along with other emotions, and their multiple joints and arms can be remotely controlled. Cameras allow the robots to recognize and respond to facial expressions. The robots were developed in collaboration with Toyota.

All content from Kiddle encyclopedia articles (including the article images and facts) can be freely used under Attribution-ShareAlike license, unless stated otherwise. Cite this article:
Miraitowa and Someity Facts for Kids. Kiddle Encyclopedia.