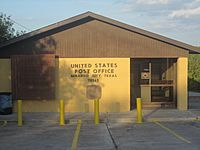 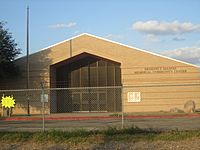 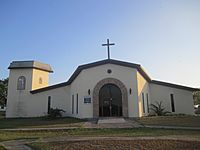 Mirando City is a census-designated place (CDP) in Webb County, Texas, United States. It is three hundred eighty-four miles southwest of Houston. The population was 166 at the 2010 census. The town gets its name from Nicolás Mirando, a Spanish land grantee. The population of Mirando City was highest in 1929, at an estimated 1500.

The peyote cactus thrives in and around Mirando City and nearby Oilton, and is a clandestine source of income for residents. Peyoteros have harvested peyote in Mirando City for over a hundred years.

Mirando City was the center of the South Texas Oil Boom, launched in 1921 by the industrialist Oliver Winfield Killam of Laredo.

O. W. Killiam established the community in 1921. Charles A. Ingersoll, known as Bob, was an early wildcatter oilman in Webb County.

There were 145 households, out of which 48.3% had children under the age of 18 living with them, 63.4% were married couples living together, 8.3% had a female householder with no husband present, and 25.5% were non-families. 22.8% of all households were made up of individuals, and 8.3% had someone living alone who was 65 years of age or older. The average household size was 3.40 and the average family size was 4.16. 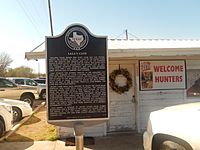 Mirando City's main business is Lala's Cafe, a Texas-Mexican restaurant on Main Street which opened in 1953 and moved to its current location in 1964 across the street from the original site. Despite its modest simplicity, Lala's is popular throughout the region and has been the subject of numerous newspaper and magazine articles, Lala's received an historical marker from the Webb County Historical Association on January 4, 2014.

Founded by the late Eduarda Rodriguez, who died in 1973, the café is now operated by her daughter, Mariana Rodriguez. Michael Black, who did the research for the historical association which led to the marker, said it was rare to know the subject of his work, but he had known Rodriguez for twenty-three years. Frank Staggs (born 1960), recalls having eaten at Lala's since he was a young boy. Staggs told the Laredo Morning Times: "Lala was a wonderful lady, and she meant a lot to this town. I know people in Houston and East Texas who ask me if Lala's is still in Mirando City, and I tell them, 'Yes, it is.'"

All content from Kiddle encyclopedia articles (including the article images and facts) can be freely used under Attribution-ShareAlike license, unless stated otherwise. Cite this article:
Mirando City, Texas Facts for Kids. Kiddle Encyclopedia.