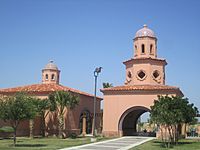 The Texas tourism travel station is located at the intersection of Interstate 35 and U.S. Route 83 north of Laredo. 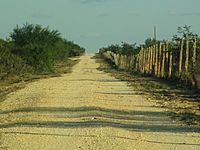 Webb County is a county located in the U.S. state of Texas. As of the 2010 census, the population was 250,304. Its county seat is Laredo. The county was named after James Webb, who served as Secretary of the Treasury, Secretary of State, and Attorney General of the Republic of Texas, and later judge of the United States District Court following the admission of Texas to statehood. By area, Webb County is the largest county in South Texas and the sixth largest in the state.

Much of Webb County history is based on the prevalence of ranching in the 19th century and continuing thereafter. The Webb County Heritage Foundation is a nonprofit organization that seeks to preserve documents and artifacts of the past to guarantee that the regional history is not lost to upcoming generations. In 2015, the foundation, headed by President James E. Moore, presented Heritage Awards to such local notables as the artist Janet Krueger, the journalist Maria Eugenia Guerra, and the Laredo Community College art instructor Martha F. Fenstermaker (1943-2014).

All content from Kiddle encyclopedia articles (including the article images and facts) can be freely used under Attribution-ShareAlike license, unless stated otherwise. Cite this article:
Webb County, Texas Facts for Kids. Kiddle Encyclopedia.