Kids Encyclopedia Facts
Not to be confused with Dimmitt, Texas.

Dimmit County ( DIM-it) is a county located in the U.S. state of Texas. As of the 2020 census, its population was 8,615. The county seat is Carrizo Springs. The county was founded in 1858 and later organized in 1880. It is named after Philip Dimmitt, a major figure in the Texas Revolution. The spelling of the county name and the individual's name differ because of a spelling error in the bill creating the county name.

Paleo-Indians artifacts indicate these people lived in Dimmit County as far back as 9200 BC. Archaic period (6000 BC to AD 1000) up to the arrival of the Spanish brought increased hunter-gatherers to the area. These Indians subsisted mostly on game, wild fruits, seeds, and roots. They carved tools from wood and stone, wove baskets, and sewed rabbitskin robes, made pottery and hunted with bows and arrows. Their most effective weapon was the atlatl, a throwing stick that greatly increased the deadliness of their spears. Coahuiltecan Indians native to Dimmit County were later squeezed out by Apache and Comanche. Hostile tribes harassed settlers, forcing some to pull up stakes. Texas Rangers and local volunteers, as well as disease, ran the Indians out of the county by 1877.

The area between the Rio Grande and the Nueces River, which included Zavala County, became disputed territory known as the Wild Horse Desert, where neither the Republic of Texas nor the Mexican government had clear control. Ownership was in dispute until the Mexican-American War. The area became filled with lawless characters who deterred settlers in the area. An agreement signed between Mexico and the United States in the 1930s put the liability of payments to the descendants of the original land grants on Mexico.

Dimmit County was officially established in 1858 from parts of Bexar, Webb, Maverick, and Uvalde counties. The county was organized in 1880. Carrizo Springs became the county seat.

Early settlers found Dimmit County to be an abundant grassland with mesquite, oak, and ash trees and wildlife that included buffalo, deer, turkeys, wild horses, panthers, and javelinas. Artesian springs, bubbling up from a vast reservoir of underground water, fed into running streams that harbored giant catfish, crawfish, and mussels. Explorers found the area a good place to hunt wild mustangs, and to feed and water cattle.

Pioneering cattleman Levi English settled Carrizo Springs in 1865 with a group of fifteen families from Atascosa County. Within two years, they were joined by a second group of settlers from Goliad County. Early dwellings were crude adobe structures or dugouts. In 1880, Levi English donated land for a county courthouse, schools, and churches in the town.

Lawlessness, banditry, and in particular cattle rustling from both sides of the Mexican border, pervaded until the 1880s. Marshal J. King Fisher, managed to bring about a reduction in the lawlessness. King also staunchly enforced the “dry county” law once the residents voted to outlaw the sale of alcohol.

Dimmit County’s first producing oil well was found in 1943. In 1980, Dimmit County farmers earned about $20 million for their crops, while about $60 million in oil and gas was produced.

Formation of the 1914 White Man's Primary Association was designed to exclude Mexican Americans from any meaningful participation in county politics. In the 1944 Smith v. Allwright case, the United States Supreme Court found the White Primary to be unconstitutional.

D.C. Frazier drilled the first artesian well, which spouted forth gallons of water a minute, near Carrizo Springs in 1884. By 1900 about twenty-five artesian wells were flowing in the Carrizo Springs area, but most of the water was wasted, and very little was used for irrigation. Colonel J. S. Taylor introduced large-scale Bermuda onion and strawberry agriculture to the area, and was the first to use irrigation on a large scale in Dimmit County. In 1899, Taylor built a thirty-foot dam across the Nueces River to irrigate 2,000 acres (8.1 km2) of farmland. He also drilled a deep artesian well. By 1910, Taylor's methods were being imitated by a number of other developers and vegetable farmers. Irrigation helped make Dimmit County part of the Texas Winter Garden Region. By the 1920s, however, artesian water began to dry up. The necessity of installing expensive pumps drove many farmers out of business. By 1934, the United States Department of the Interior concluded that the existing water supply would not support substantial additional development. By 1965 only about 15,000 acres (61 km2) was being irrigated. Much of the land reverted to rangeland.

The Eagle Ford oil field was reported to be under development in 2011 with 3,000 wells projected to extract oil by hydraulic fracturing from tight shale formations. The oil play has improved business activity in the county but raised fears regarding the adequacy of water supplies as fracking requires injection of large quantities of water under pressure into wells to break surrounding rock. 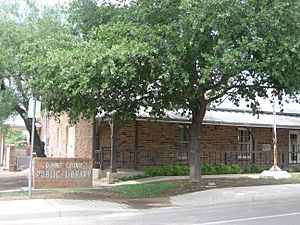 All of Dimmit County is served by the Carrizo Springs Independent School District.

All content from Kiddle encyclopedia articles (including the article images and facts) can be freely used under Attribution-ShareAlike license, unless stated otherwise. Cite this article:
Dimmit County, Texas Facts for Kids. Kiddle Encyclopedia.