La Salle County is a county in Texas. As of the 2020 census, its population was 6,664. Its county seat is Cotulla. The county was created in 1858 and later organized in 1880. It is named for René-Robert Cavelier, Sieur de La Salle, a 17th-century French explorer.

The area of present-day La Salle County was occupied by the Coahuiltecan Indians until the 18th century, when they were squeezed out by the Spanish from the south and the Apache from the north. After the Mexican War of Independence, the Mexican government used land grants to encourage settlement, but very few settled in the area. By 1836, the area was entirely populated by Indians.

Between the Texas Revolution and the Mexican War the area of present-day La Salle County lay in the disputed area between the Rio Grande and the Nueces River. Desperadoes ruled the area, as neither the Mexican government nor the Republic of Texas could gain control. The Treaty of Guadalupe Hidalgo assigned the Nueces Strip to Texas in 1848, but outlaws and hostile Indians delayed settlement of the area.

La Salle County was officially formed in 1858 from the Bexar District. The first settlements were established on the road from Laredo to San Antonio. In 1852, the Army established Fort Ewell near present-day Artesia Wells where the road crossed the Nueces River to protect travelers on the road. The fort was abandoned in 1854, and the remaining inhabitants moved to the settlement of Guajoco, located one and a half miles from the fort. By 1871, around 60 people lived in Guajoco, mostly of Mexican descent.

In 1856, William A. Waugh of Ohio established a ranch where the San Antonio–Laredo road crossed Cibolo Creek. His ranch headquarters became a stopping point for travelers and in 1879, a post office was established there with the name Waugh's Rancho. Iuka, an early settlement located 8 miles west of present-day Cotulla, was established in 1868 by several families and served as a stage stop and marketplace for cattle-buyers. The settlement established a post office in 1880. In 1870, the population of La Salle County was 69, and by 1880 it was 789.

La Salle County was formally organized in 1880 and Stuart's Rancho, near Guajoco, was designated the county seat. In the early 1880s, the International-Great Northern Railroad laid tracks to the county. Around this time, outlaws were gradually eliminated from the area, and the last Indian raid happened in 1878. These changes help bring stability to the county.

With the arrival of the railroads, settlements such as Iuka and Guajoco were abandoned as inhabitants moved near the railroad tracks. Polish immigrant Joseph Cotulla arrived in La Salle County in 1868 and eventually established a large ranching operation. In 1881, Cotulla donated 120 acres of his land to the railroad for the townsite of Cotulla, and the railroad built a depot there in 1882. While Cotulla continued to develop his town, Iuka's postmaster, Jesse Laxton, developed a townsite just across the tracks named La Salle. La Salle was granted a post office in 1881, and in 1882, was designated the temporary county seat. However, Cotulla became the county seat by special election in 1883. 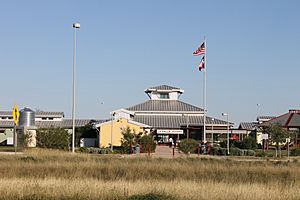 O. Henry, the famous short-story writer, lived and worked on a sheep ranch in La Salle County from 1882 to 1884 before settling in Austin as a pharmacist and bank teller.

Ray Keck, the fifth and current president of Texas A&M International University in Laredo, was born in San Antonio and reared in Cotulla, where his father, Ray Keck, Jr., was president of Stockmen's National Bank.

All content from Kiddle encyclopedia articles (including the article images and facts) can be freely used under Attribution-ShareAlike license, unless stated otherwise. Cite this article:
La Salle County, Texas Facts for Kids. Kiddle Encyclopedia.