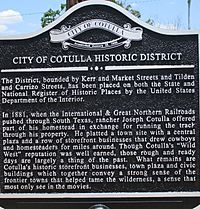 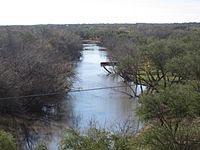 Polish immigrant Joseph Cotulla, who was reared in Silesia, then a part of Prussia, migrated to the United States in the 1850s. He joined the Union Army in Brownsville, Texas. He lived in Atascosa County but arrived in La Salle County in 1868 to establish what became a large ranching operation. After learning that the International-Great Northern Railroad intended to lay tracks in La Salle County, he worked to establish the town which bears his name. In 1881, Cotulla donated 120 acres of his land to the railroad, and in 1882, a depot was constructed there. In 1883, the town was granted a post office. The same year, Cotulla became the county seat by special election.

Joseph Cotulla's great-grandson, William Lawrence Cotulla (born c. 1936), a former storekeeper in Cotulla, is a rancher in La Salle, Dimmit, and Webb counties. In a 2013 interview with the Laredo Morning Times, William Cotulla noted the community of his birth has changed completely in less than eighty years, having gone through several phases, beginning with emphasis on farming, then ranching, thereafter hunting leases, and now petroleum and natural gas through the Eagle Ford Shale boom. However, with declining gasoline prices, the Eagle Ford boom took a sharp downturn by the fall of 2015.

On June 28, 2013, the Texas Historical Commission, the United States Department of the Interior, and the National Register of Historic Places designated downtown Cotulla as a significant part of Texas history with the unveiling of an historic marker. In 2006, Cotulla had been designated as a Texas Main Street community.

City manager Lazaro "Larry" Dovalina (born 1947), who formerly held the same position in Laredo, compared the impact of the recent growth of Cotulla to the arrival of the railroad in the late 19th century. Cotulla is believed to have tripled in population since the 2010 census, with possibly 12,000 residents in 2013. With Eagle Ford Shale and many jobs in the oil and gas fields, Cotulla has seen the building of new hotels, restaurants, truck stops, and refineries. Many older buildings downtown are being updated and renovated for other kinds of use. Dovalina reported that the ad valorem property tax base in Cotulla has increased from $52 million in 2009 to $127 million in 2013. The growth has made affordable housing a premium in the community.

In 1973, two railroad locomotives collided in Cotulla, and three people were killed as a result. In 2008, the area about Cotulla burned in a huge grass fire.

With continuing growth from the Eagle Ford Shale deposit, Cotulla houses the largest sand fracking facility in North America. Cotulla falls within the second largest oil-producing region of the United States. The oil boom has increased sales tax collections in Cotulla from $445,000 in 2009 to more than $3 million in 2013. The city has sixteen hotels and seven others under construction. The hotel-motel tax of 7 percent is less than that in larger surrounding cities. Cotulla is seeking to attract Wal-Mart, H-E-B, and other companies once it can show that its growth is sustainable.

According to the United States Census Bureau, the city has a total area of 2.0 square miles (5.2 km2), all of it land.

The Nueces River flows through southern Cotulla in a southeastward direction to the Gulf of Mexico near Corpus Christi.

There were 1,208 households out of which 39.0% had children under the age of 18 living with them, 52.7% were married couples living together, 17.8% had a female householder with no husband present, and 25.4% were non-families. 22.6% of all households were made up of individuals and 11.8% had someone living alone who was 65 years of age or older. The average household size was 2.95 and the average family size was 3.50. 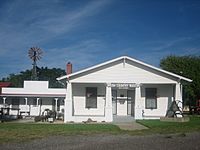 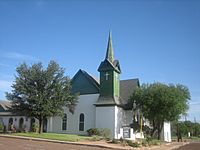 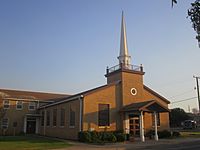 The First Baptist Church of Cotulla was established in the 1880s. The current sanctuary opened in 1948. 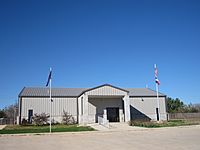 The Brush Country Museum, with various local ranching memorabilia, is located in Cotulla.

Cotulla has Roman Catholic, Southern Baptist, United Methodist, Presbyterian, and non-denominational churches. The Presbyterians and Baptists originally shared the Methodist facilities, which began in 1881. New Methodist buildings were constructed in 1906 and again in 1928.

In 1883-1884, the Reverend W. D. Johnson organized a Baptist fellowship in Cotulla. After several years of meeting at the Methodist Church, the first Baptist building opened in 1889, with the minister John Van Epps Covey (1821–1898) preaching the first sermon in the new structure. The current church sanctuary on Main Street opened in 1948 under the leadership of the Reverend Jesse Cooke. The new First Baptist pastor in Cotulla as of 2013 is Loren G. Fast.

Prevailing Word Church, located in a new sanctuary at 419 South Main, had co-pastors in 2009, L. Lynn Beams and Abram De La Garza. It has services at 3 p.m. Sundays, rather than the customary morning hours, and mid-week services on Thursday evenings, instead of Wednesday.

All content from Kiddle encyclopedia articles (including the article images and facts) can be freely used under Attribution-ShareAlike license, unless stated otherwise. Cite this article:
Cotulla, Texas Facts for Kids. Kiddle Encyclopedia.