Rancher Asher Richardson built the town after he purchased a huge tract of land in a special state sale. His Asherton Land and Irrigation Company developed 48,000 acres (190 km2). Richardson subsequently funded the Asherton and Gulf Railway Company. The Asher and Mary Isabelle Richardson House (1910), perched on a hill in Asherton, is easily visible from U.S. Highway 83. It is named for a combination of the first names of Richardson and his wife, Mary Isabelle, or Belle. The structure is made of sandstone and is designed in the Prairie school of architecture by the late Alfred Giles of San Antonio. The house has remained in the family for generations. 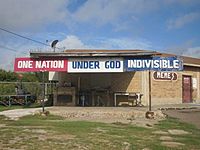 Meme's Bar in Asherton recites a line from the Pledge of Allegiance to the American flag. 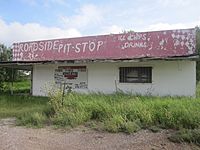 The former Roadside Pit Stop on U.S. Highway 83 reflects the declining business climate of rural communities such as Asherton.

The Asherton and Gulf Railroad was originally based in Carrizo Springs. From 1905 to 1909, the railroad was known as the Nueces Valley, Rio Grande and Mexico Railway Company. In 1909, 12 miles (19 km) of track opened between Artesia Wells and Light, Texas. By 1910, the last 20 miles (32 km) between Light and Asherton were completed.

Telephone service arrived in 1905, and essential buildings were constructed. In 1909, Asherton obtained a post office. By 1915, the population had reached 1,000, with a bank, hotels, blacksmiths, three stores and a lumber yard. The town was incorporated in 1925. It is one of the few Texas communities which still uses the city commission government. In 1927, it became one of the largest producers of Bermuda onions in the United States. The population peaked in 1954 at 2,425.

According to the United States Census Bureau, Asherton has a total area of 0.81 square miles (2.1 km2), all of it land.

There were 428 households out of which 42.8% had children under the age of 18 living with them, 56.8% were married couples living together, 18.5% had a female householder with no husband present, and 20.3% were non-families. 18.9% of all households were made up of individuals and 11.2% had someone living alone who was 65 years of age or older. The average household size was 3.13 and the average family size was 3.62.

All content from Kiddle encyclopedia articles (including the article images and facts) can be freely used under Attribution-ShareAlike license, unless stated otherwise. Cite this article:
Asherton, Texas Facts for Kids. Kiddle Encyclopedia.