Jim Hogg County is a county located in the U.S. state of Texas. As of the 2020 census, the population was 4,838. Its county seat is Hebbronville. The county is named for James Stephen Hogg, the governor of Texas from 1891 to 1895.

Jim Hogg County was formed in 1913 from portions of Brooks and Duval counties. It was named after Jim Hogg, the 21st Governor of Texas, and the first governor born in the state of Texas.

There are no incorporated areas in Jim Hogg County. 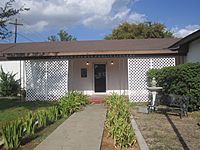 Jim Hogg County Library is located near the courthouse. 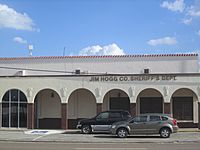 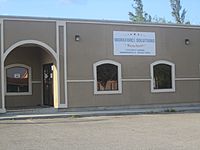 All of the county is served by the Jim Hogg County Independent School District.

All content from Kiddle encyclopedia articles (including the article images and facts) can be freely used under Attribution-ShareAlike license, unless stated otherwise. Cite this article:
Jim Hogg County, Texas Facts for Kids. Kiddle Encyclopedia.