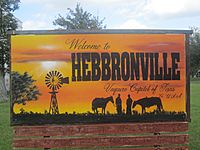 Hebbronville calls itself "The Vaquero Capitol of Texas and the USA." 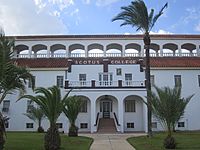 Scotus College, used for the training of Roman Catholic priests, moved from Mexico to Hebbronville in 1926 to escape religious persecution. 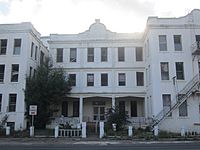 The abandoned Hotel Viggo (built 1915) is located across the highway from the Jim Hogg County Courthouse in Hebbronville. 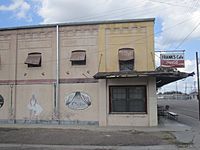 The rustic Frank's Cafe at 502 E. Galbraith St. in Hebbronville was featured in 2004 in an episode of Bob Phillips's Texas Country Reporter.

Hebbronville ( HEB-rən-vill) is a census-designated place (CDP) in and the county seat of Jim Hogg County, Texas, United States. The population was 4,558 at the 2010 census. In 1918, Helen Sewel Harbison became the first woman in Texas to cast a ballot, two years before the implementation of the Nineteenth Amendment to the United States Constitution.

The Colegio Altamirano, founded by settlers of Spanish ancestry who wanted their children to learn Spanish culture, was an institution in Hebbronville from 1897 until its closing in 1958.

The community calls itself the "Vaquero Capitol of Texas and the USA."

According to the United States Census Bureau, the CDP has a total area of 5.9 square miles (15 km2), all of it land.

Hebbronville is located on land which once formed part of Las Noriecitas, one of the earliest ranches founded in the area.

The town's namesake, James Richard Hebbron, acquired land, in about 1880, from the descendants of the original grantee, Ingacio Benavides. With two others, he bought 18,000 acres, in the then Duval County, just above Peña. One of his sons, Arthur Hebbron, came down from California and took charge of running his ranch.

Hebbronville itself was created in 1883, when the Texas-Mexican Railway Company built a railroad through the area. Francisco P. Peña, operator of Peña Station on this route, refused to sell any land to the Texas-Mexican for a townsite. The company then approached J. R. Hebbron, who arranged for the sale of land for the new townsite, near Peñitas. The old train station at Peñitas was then loaded onto a flatcar, moved 1½ miles west and named Hebbronville.

For a time, Hebbronville ranked as the largest cattle-shipping center in the country and it continues to be a hub of ranching activity.

A photograph of James R. Hebbron hangs in the Jim Hogg County Courthouse, 102, East Tilley Street, Hebbronville. (See External Link below) He was born in London, England, but spent most of his adult life in California, mainly around Salinas.

There were 1,554 households out of which 38.1% had children under the age of 18 living with them, 54.6% were married couples living together, 15.2% had a female householder with no husband present, and 25.0% were non-families. 23.4% of all households were made up of individuals and 12.9% had someone living alone who was 65 years of age or older. The average household size was 2.87 and the average family size was 3.41.

All content from Kiddle encyclopedia articles (including the article images and facts) can be freely used under Attribution-ShareAlike license, unless stated otherwise. Cite this article:
Hebbronville, Texas Facts for Kids. Kiddle Encyclopedia.