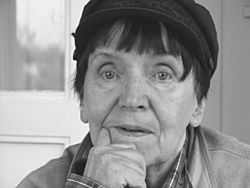 Mirkka Elina Rekola (26 June 1931 – 5 February 2014) was a Finnish writer from Tampere. She published poems, aphorisms and essays. Her poetry was called "difficult". Many people read her work as late as in the 1990s. She was awarded many times.

All content from Kiddle encyclopedia articles (including the article images and facts) can be freely used under Attribution-ShareAlike license, unless stated otherwise. Cite this article:
Mirkka Rekola Facts for Kids. Kiddle Encyclopedia.