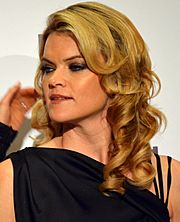 Andrea Kay "Missi" Pyle (born November 16, 1972) is an American movie, television, stage, voice actress and singer. She was in the movies Charlie and the Chocolate Factory, Big Fish, A Cinderella Story Once Upon a Song, Galaxy Quest, The Artist and in Dodgeball: A True Underdog Story.

Pyle was born on November 16, 1972 in Houston, Texas. She studied at the North Carolina School of the Arts and at Germantown High School. Pyle was married to Antonio Sacre from 2000 until they divorced in 2005. She married Casey Anderson in 2008.

All content from Kiddle encyclopedia articles (including the article images and facts) can be freely used under Attribution-ShareAlike license, unless stated otherwise. Cite this article:
Missi Pyle Facts for Kids. Kiddle Encyclopedia.