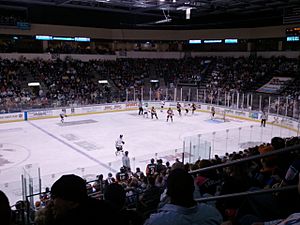 The Missouri Mavericks is an American minor-league ice hockey team in the Central Hockey League (CHL). Its home games are played at the Independence Events Center in Independence, Missouri, which is near Kansas City, Missouri.

In April 2009, the CHL announced that Independence would get a new team to start play that fall. In June, the team said that it would be called the Mavericks.

All content from Kiddle encyclopedia articles (including the article images and facts) can be freely used under Attribution-ShareAlike license, unless stated otherwise. Cite this article:
Missouri Mavericks Facts for Kids. Kiddle Encyclopedia.