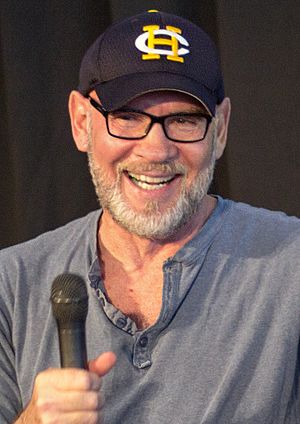 Mitchell Craig "Mitch" Pileggi (born April 5, 1952) is an American actor. He was born in Portland, Oregon. Pileggi is best known for his role as Walter Skinner on The X-Files. He had a recurring role on Stargate Atlantis as Colonel Steven Caldwell. He appeared in the 2008 movie Flash of Genius. In 2008, he began a recurring role as Ernest Darby in Sons of Anarchy. He starred as Harris Ryland in the TNT revival of Dallas (2012–2014).

All content from Kiddle encyclopedia articles (including the article images and facts) can be freely used under Attribution-ShareAlike license, unless stated otherwise. Cite this article:
Mitch Pileggi Facts for Kids. Kiddle Encyclopedia.