There were 57 households out of which 61.4% had children under the age of 18 living with them, 52.6% were married couples living together, 19.3% had a female householder with no husband present, and 14.0% were non-families. 8.8% of all households were made up of individuals and none had someone living alone who was 65 years of age or older. The average household size was 3.44 and the average family size was 3.49. 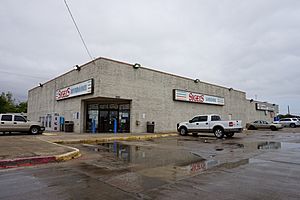 Originally a mobile home park outside of city limits, it was incorporated on January 25, 1990 so that a beer/wine/liquor store could open. It is still that way today. After opening the stores the roads through the park were paved for the first time and full-time security was provided to the residents at no charge to them. Until Fall of 2007 it was the only city within Rockwall County that allowed alcohol sales (excluding restaurants).

All content from Kiddle encyclopedia articles (including the article images and facts) can be freely used under Attribution-ShareAlike license, unless stated otherwise. Cite this article:
Mobile City, Texas Facts for Kids. Kiddle Encyclopedia.