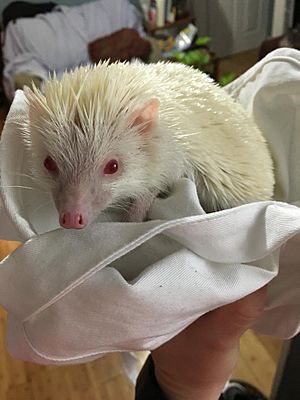 This hedgehog has no pigmentation due to a mutation. 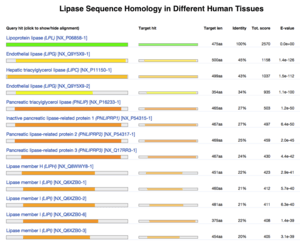 This chart compares the sequence identity of different lipase proteins throughout the human body. It demonstrates how proteins evolve, keeping some regions conserved while others change dramatically.

Molecular evolution is the process of evolution in DNA, RNA, and proteins.

Molecular evolution emerged as a scientific field in the 1960s as researchers from molecular biology, evolutionary biology and population genetics sought to understand the structure and function of nucleic acids and protein. Some of the key topics have been the evolution of enzyme function, the use of nucleic acid changes as a molecular clock to study species divergence, and the origin of non-functional or junk DNA.

Recent advances in genomics, including whole-genome sequencing, and bioinformatics have led to a dramatic increase in studies on the topic. In the 2000s, the role of gene duplication, the extent of adaptive molecular evolution versus neutral genetic drift, and the identification of molecular changes responsible for various human characteristics especially those pertaining to infection, disease, and cognition.

Molecular systematics is the process of using data on the DNA, RNA, or proteins to resolve questions in phylogeny and taxonomy. The idea is to place groups in their correct position on the evolutionary tree. This corrects their biological classification from the point of view of evolution. The technique has already led to major changes in the taxonomy of living things, including the names for higher categories, which had been stable for well over a century.

Molecular systematics has been made possible by techniques for sequence analysis. This gives the exact sequence of nucleotides or bases in either DNA or RNA. At present it is still expensive to sequence the entire genome of an organism, but it has been done for over 100 species.

All content from Kiddle encyclopedia articles (including the article images and facts) can be freely used under Attribution-ShareAlike license, unless stated otherwise. Cite this article:
Molecular evolution Facts for Kids. Kiddle Encyclopedia.