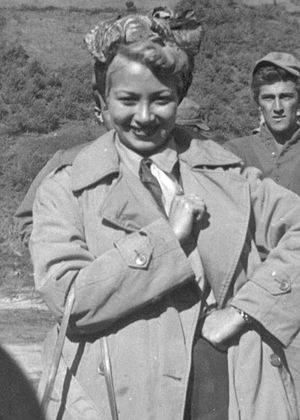 Lewis was born in Chicago, Illinois. She was married twice and had three sons.

Lewis died from natural causes on June 12, 2015 at her Woodland Hills apartment in Los Angeles, California. She was 93.

All content from Kiddle encyclopedia articles (including the article images and facts) can be freely used under Attribution-ShareAlike license, unless stated otherwise. Cite this article:
Monica Lewis Facts for Kids. Kiddle Encyclopedia.