Monon is a town in Monon Township, White County, Indiana, United States. The population was 1,777 at the 2010 census.

There were 600 households of which 43.8% had children under the age of 18 living with them, 49.5% were married couples living together, 12.0% had a female householder with no husband present, 8.5% had a male householder with no wife present, and 30.0% were non-families. 25.3% of all households were made up of individuals and 12.8% had someone living alone who was 65 years of age or older. The average household size was 2.96 and the average family size was 3.47.

There were 642 households out of which 32.7% had children under the age of 18 living with them, 50.9% were married couples living together, 12.1% had a female householder with no husband present, and 31.8% were non-families. 26.5% of all households were made up of individuals and 14.6% had someone living alone who was 65 years of age or older. The average household size was 2.70 and the average family size was 3.15. 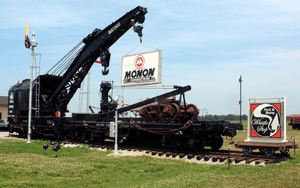 The Monon Connection Museum north of the town.

The town of Monon was platted by James Brooks in 1853 as "New Bradford". This act by the president of the New Albany and Salem Railroad (predecessor of the Monon Railroad) foretold the story of the town. The town would grow as the train company prospered, but once "The Monon" declined, so would the town's economy.

The town's name is derived from the names of two creeks nearby, the Big Monon and the Little Monon. The spelling of the name of the creeks was formerly Monong, a Potawatomi word which one authority says meant "swift-running". In the 1940s, the town's name was used as a nickname for the railroad company, and in 1956 the company formally adopted it as its corporate name.[1] The first post office was established in 1838 under the name Monon,[2], and when the town was incorporated in 1879, it legally adopted the post office's name as the town's name.[3]

The town of Monon is situated on an important junction of different branches of the Monon lines. The northern division came into Monon and turned ninety degrees heading south to Lafayette and Louisville, Kentucky. Another line comes from Indianapolis and turned east. Another line headed north to Michigan City.[4]

In its heyday, the Monon Railroad had two train yards in Monon. The main yard was 11 tracks wide with a capacity for 270 cars. The South Yard was narrower, 5 tracks wide, but longer and had a 278-car capacity.

However, today, all passenger train services have closed, as has the line to Indianapolis and most of the line to Michigan City. The only trains through Monon now are a CSX Transportation line from Maynard, Indiana to Lafayette and another on a portion of the old Michigan City line.[5]

The Monon post office has been in operation since 1849.

The Monon Commercial Historic District was listed on the National Register of Historic Places in 2000.

The Monon Food Fest is held during the first Saturday in June every year. There is a large car show and a wide variety of vendors there with both food and items for sale. There is also live entertainment and pony rides.

Monon was once a growing railroad town with a convergence of several railway lines carrying cargo and passengers throughout Indiana. The old 11-track yard is now overgrown foundation.

The town is located at the intersection of U.S. Highway 421 and state road 16. US 421 runs north to Michigan City and south to Indianapolis.

The town is trying to pass plans that would include a new downtown area that they believe would attract more visitors and more people to live in the town. Through the efforts of the Monon Civic Preservation Society the business district of Monon was placed on the National Register of Historic Places. The Society maintains the historic Civic Center (originally the Arlington Hotel) and the Monon Railroad Caboose memorial park

All content from Kiddle encyclopedia articles (including the article images and facts) can be freely used under Attribution-ShareAlike license, unless stated otherwise. Cite this article:
Monon, Indiana Facts for Kids. Kiddle Encyclopedia.