The Monongahela Incline is a funicular located near the Smithfield Street Bridge in Pittsburgh, Pennsylvania. Built by John Endres in 1870, it is the oldest continuously operating funicular in the United States. It is also one of two surviving inclines (the other is the nearby Duquesne Incline) from the original 17 passenger-carrying inclines built in Pittsburgh starting in the late 19th century. Its lower station is across the street from the Station Square shopping complex, and is easily accessible from the light rail system at the Station Square station. 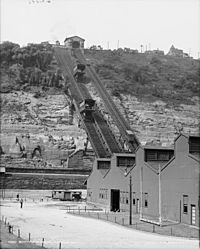 Pittsburgh's expanding industrial base in 1860 created a huge demand for labor, attracting mainly German immigrants to the region. This created a serious housing shortage as industry occupied most of the flat lands adjacent to the river, leaving only the steep, surrounding hillsides of Mt. Washington or "Coal Hill" for housing. However, travel between the "hill" and other areas was hindered by a lack of good roads or public transport.

The predominantly German immigrants who settled on Mt. Washington, remembering the seilbahns (cable cars) of their former country, proposed the construction of inclines along the face of Coal Hill. The result was the Monongahela Incline, which opened on May 28, 1870. Earlier inclines were used to transport coal in the Pittsburgh area, including the Kirk Lewis incline on Mt. Washington and the Ormsby mine gravity plane in nearby Birmingham, later annexed to the city of Pittsburgh.

The Monongahela Incline is operated by the Port Authority of Allegheny County, which operates the rest of Pittsburgh's transit system. Transfers can be made between the incline and the light rail and buses.

Water damage caused by flooding due to a broken city water main forced the incline to close temporarily on February 2, 2019. After multiple delays caused by the extensive repairs, the incline reopened 13 weeks later on May 10.

All content from Kiddle encyclopedia articles (including the article images and facts) can be freely used under Attribution-ShareAlike license, unless stated otherwise. Cite this article:
Monongahela Incline Facts for Kids. Kiddle Encyclopedia.