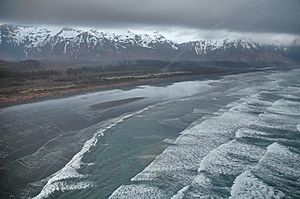 Montague Island at low tide in 2010 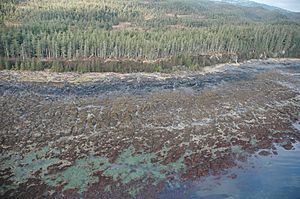 An aerial photograph taken on November 16, 2010, showing erosion patterns in joint patterns of rocks on the shore of Montague Island, with large tide pools showing at the lower limit of low tide.

Montague Island is well known in Seward, Alaska, for its sports fishery, and it is referred to as "The Land of the Giants." In 2007, the waters around the island produced a 350-pound (156-kg) halibut and many boats full of fish weighing over 100 pounds (45 kg) each.

The island's coastal ecology has been subjected to "unprecedented amounts of ocean trash" transported by wind and currents from Japan's March 2011 tsunami, according to the Center for Alaskan Coastal Studies in May 2012. A large-scale clean-up began on 22 May 2012, funded by The Marine Conservation Alliance Foundation.

All content from Kiddle encyclopedia articles (including the article images and facts) can be freely used under Attribution-ShareAlike license, unless stated otherwise. Cite this article:
Montague Island (Alaska) Facts for Kids. Kiddle Encyclopedia.