The Montlake Bridge is a double-leaf bascule bridge that carries State Route 513 (Montlake Boulevard) over Seattle's Montlake Cut—part of the Lake Washington Ship Canal—connecting Montlake and the University District.

It is the easternmost bridge spanning the canal. The bridge is 344 ft (105 m) long, and was designed by Carl F. Gould, one of the original architects of the University of Washington campus. The bridge and its control towers were designed in conjunction with the university's Collegiate Gothic style. It provides a clearance of 46 ft (14 m) and is reported as providing 48 ft (15 m) of vertical clearance above the mean regulated level of Lake Washington for the central 100 ft (30 m) of the bascule span. It is one of four original bascule-type drawbridges over the Ship Canal, the others being the Ballard, Fremont, and University Bridges. It was the last one to be completed, has the highest clearance of the four, and is the only one that is part of the state highway system. It is also one of six bascule bridges based on a design derived from the Chicago bascule bridge, but is unique because of its trunnion supports, employed to avoid a patent infringement lawsuit by the Strauss Bascule Bridge Company. 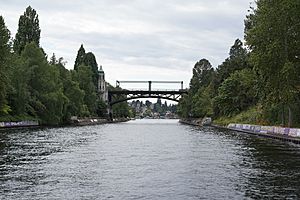 East side of the bridge as seen from Lake Washington.

Piers and abutments for a permanent bridge were built in 1914 as part of construction for the Ship Canal, but a serious proposal for a bridge at Montlake didn't come until 1916. which was finished in June 1925. The permanent bridge was opened on June 27, 1925, a month ahead of schedule and as the centerpiece for a local parade that drew thousands of residents. 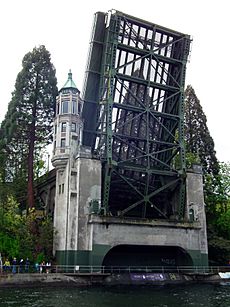 The south side of the Montlake Bridge fully open

A report from 1993 states that the Montlake Bridge averaged a volume of 60,900 vehicles each weekday, while another report from 2001 puts normal weekend traffic across the bridge at about 40,000 vehicles each day. In addition to the vehicular traffic, the bridge conveys pedestrians and bicyclists across the canal by way of sidewalks on each side of the roadway. The bridge does not open during morning and evening rush hours. It opens at designated times (usually on the hour and half-hour) during the hours just prior to and after rush periods, and on demand at other times. The bridge openings last for an average of four minutes from when traffic stops to when it resumes again. Most of the openings are for sailboats, as most of the tugs that operate this far east are able to pass under the bridge in its closed position. The bridge creates a bottleneck for traffic heading to and from State Route 520 (SR-520), and the creation of alternate routes has been proposed multiple times over the years. Traffic can become backed up for more than a mile when the bridge is open, as can be seen in aerial photographs. Plans to replace SR-520 include adding a second bascule bridge across the Montlake Cut next to the current Montlake Bridge.

The Montlake Bridge is celebrated as the site of boating season's "opening day" festivities the first Saturday in May.

The bridge was constructed by the city of Seattle at a cost of $670,000. The steel was fabricated and erected by the Wallace Equipment Company. A. Munster, acting bridge engineer of the City of Seattle supervised the construction, J.D. Blackwell was city engineer and D.W. McMorris was assistant engineer.

The bridge and the Montlake Cut together are a City of Seattle Designated Landmark (ID #107995), and the bridge was added to the National Register of Historic Places in 1982, as well as the Washington Heritage Register. It is owned and operated by the Washington State Department of Transportation.

All content from Kiddle encyclopedia articles (including the article images and facts) can be freely used under Attribution-ShareAlike license, unless stated otherwise. Cite this article:
Montlake Bridge Facts for Kids. Kiddle Encyclopedia.