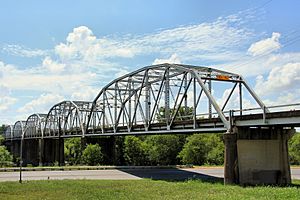 The Montopolis Bridge carries the eastbound frontage road of U.S. Route 183 over the Colorado River. It was added to the National Register of Historic Places in 1996.

Montopolis is a neighborhood in Austin, Texas. Located southeast of the city's urban core, Montopolis encompasses part of ZIP code 78741.

Montopolis is located south of Lake Lady Bird and is bounded on the west by Grove Street and the Pleasant Valley neighborhood, to the south by Texas State Highway 71 and the Southeast Austin neighborhood and U.S. Route 183 to the east. It is located adjacent to Austin-Bergstrom International Airport. and is located in city council District 3.

Montopolis was settled in the 1830s as a separate community southeast of Downtown Austin in south central Travis County when Jessie C. Tannehill built a cabin and laid out a townsite to be called Montopolis for its location on top of a hill. Montopolis was almost made the capital of the fledgling Republic of Texas, before it was moved to Austin. The town did not develop as expected, probably because Austin was so close. A small community of fifty, however, was in place in the mid-1890s, and a post office called Montopolis opened in January 1897. The two cities embarked on starkly different paths. After the Civil War, Montopolis became home to newly freed slaves who worked as sharecroppers. In the early 20th century, the neighborhood saw a large influx of Mexican immigrants, a trend that continues today. The census of 1900 listed the Montopolis population as 142, but in 1902 its post office was discontinued and mail for area residents was sent to Austin.

Despite the close proximity, Austin waited until 1951 to partially annex Montopolis, and it wasn't fully annexed until the 1970s. The working-class neighborhood has long been one of the poorest in Austin, with about two of every five residents living in poverty, according to the U.S. Census. Educational attainment also lags far behind the city average — in 2000, 53 percent of Montopolis residents more than 25 years old didn't have a high school diploma.

Montopolis's fortunes may finally be turning. Given Austin's tremendous growth, the community is located in a strategic location in Austin — adjacent to the Austin-Bergstrom International Airport and along two major highways: Texas State Highway 71 and U.S. Route 183. In 2005, the City of Austin was working on finalizing a Master Plan for the entire East Riverside Drive corridor, from the East Riverside-Oltorf Combined Planning Area to Montopolis to ABIA.

However, residents are trying to stop the gentrification of their neighborhood similar to what happened in the Central East Austin and East Cesar Chavez neighborhoods. Although activists stopped a zoning change in early 2014 that would have allowed building condos instead of duplexes, the condos were approved in late 2014. As of 2015, Google announced that their Google Fiber internet service will be available in the area.

All content from Kiddle encyclopedia articles (including the article images and facts) can be freely used under Attribution-ShareAlike license, unless stated otherwise. Cite this article:
Montopolis, Austin, Texas Facts for Kids. Kiddle Encyclopedia.