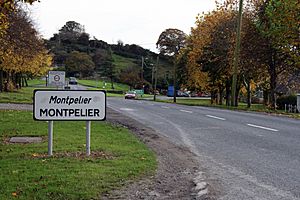 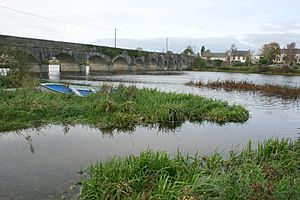 O'Briensbridge over the Shannon from Montpelier

Montpelier (Irish: Montpelier) is a village and a townland in east County Limerick, Ireland, on the east bank of the River Shannon. It is connected to O'Briensbridge across the river in County Clare by a 14-arch stone bridge. The first bridge across the river here was built in 1506 by Turlough O'Brien, First Earl of Thomond and his brother, the Bishop of Killaloe.

The ancient river-crossing here is believed to be identical with Áth Caille (meaning "Ford of the Wood"): one of the three fords mentioned in the Triads of Ireland, the others being Áth Clíath (Dublin) and Áth Lúain (Athlone).

All content from Kiddle encyclopedia articles (including the article images and facts) can be freely used under Attribution-ShareAlike license, unless stated otherwise. Cite this article:
Montpelier, County Limerick Facts for Kids. Kiddle Encyclopedia.