The Moor Frog (Rana arvalis) is a species of frog. They are part of the family Ranidae. They are skinny, reddish-brown and semi-aquatic amphibians.

This is a small frog, characterized by an unspotted belly, a large, dark ear spot, and — often, not always — a pale stripe down the center of the back. They are generally described as a reddish-brown, but can also be yellow, gray, or light olive. Their bellies are white or yellow and they have a "bandit-like" black stripe going from their nose to their ears. They vary from 5.5 to 6.0 cm long, but can reach up to 7.0 cm in length, and their heads are more tapered than those of the Common frog (Rana temporaria). The skin on their flanks and thighs is smooth, and the posterior part of their tongues is forked and free. They have horizontal pupils, their feet are partially webbed, and their back legs are shorter than those of other species of frogs. The males are different from the females because of the nuptial pads on their first fingers and their paired guttural vocal sacs. 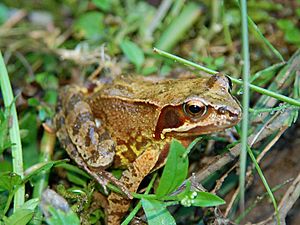 The species has an extensive distribution across Europe. It can be found inhabiting an area stretching from the lowlands of Central and Southern Europe to Siberia, in Austria, Belarus, Belgium, Czech Republic, Denmark, Estonia, Finland, France, Germany, Hungary, Italy, Latvia, Lithuania, Moldova, Netherlands, Norway, Poland, Romania, Russian Federation, Slovakia, Slovenia, Sweden, Switzerland, and Ukraine. However, they are believed to be extirpated in Switzerland and maybe Siberia, as well. The records of frogs being in Siberia at all possibly were in error. Alsace, France, constitutes the western boundary of their territory.

The types of land they can inhabit are greatly varied. They live in tundra, forest tundra, forest, forest steppe, and steppe, forest edges and glades, semideserts, swamps, meadows, fields, bush lands, and gardens. They prefer areas untouched by humans, such as damp meadows and bogs, but they still may be able to live in agricultural and urban areas.

Moor frogs provide a good model for studying local adaptation as they experience a wide range of environments and are relatively limited in their movements. Their restriction in movements implies limited gene flow and facilitates evolution through adaptive genetic differentiation among populations. 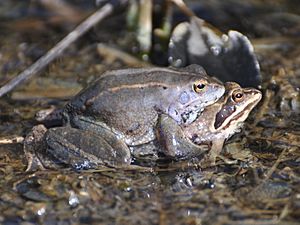 A pair of moor frogs in amplexus near Hamburg, Germany.

The mating season takes place between March and June right after the end of hibernation. Males form breeding choruses, and their songs sound similar to those of the agile frog, (Rana dalmatina). Their calls can "sound like air escaping from a submerged empty bottle: 'waug...waug...waug'. Males can also develop bright-blue coloration for a few days during the season.

The spawning happens very quickly and is completed in three to 28 days. The spawn of each frog is laid in one or two clusters of 500-3000 eggs in warm, shallow waters like in ponds.

Metamorphosis happens between June and October. Larvae are about 45 mm long and colored dark with small metallic dots. When they become tadpoles, they eat algae and small invertebrates. The adult frogs' feeding is halted during the breeding season, but their diets consist of insects and various invertebrates.

All content from Kiddle encyclopedia articles (including the article images and facts) can be freely used under Attribution-ShareAlike license, unless stated otherwise. Cite this article:
Moor frog Facts for Kids. Kiddle Encyclopedia.