The true frogs, family Ranidae, have the widest distribution of any frog family. They are abundant throughout most of the world, occurring on all continents except Antarctica. The true frogs are present in North America, northern South America, Europe, Africa (including Madagascar), and Asia. The Asian range extends across the East Indies to New Guinea and a single species (the Australian wood frog (Hylarana daemelii)) has spread into the far north of Australia.

Typically, true frogs are smooth and moist-skinned, with large, powerful legs and extensively webbed feet. The true frogs vary greatly in size, ranging from small—such as the wood frog (Lithobates sylvatica)—to the largest frog in the world, the goliath frog (Conraua goliath).

Many of the true frogs are aquatic or live close to water. Most species lay their eggs in the water and go through a tadpole stage. However, as with most families of frogs, there is large variation of habitat within the family. Those of the genus Tomopterna are burrowing frogs native to Africa and exhibit most of the characteristics common to burrowing frogs around the world. There are also arboreal species of true frogs, and the family includes some of the very few amphibians that can live in brackish water.

The subdivisions of the Ranidae are still a matter of dispute, although many are coming to an agreement. Most authors believe the subfamily Petropedetinae is actually a distinct family called Petropedetidae. The validity of the Cacosterninae is likewise disputed; they are usually merged in the Petropedetinae, but when the latter are considered a distinct family, the Cacosterninae are often awarded at least subspecific distinctness, too, and sometimes split off entirely. Still, there is general agreement today that the Mantellidae, which were formerly considered another ranid subfamily, form a distinct family. There is also a recent trend to split off the forked-tongued frogs as distinct family Dicroglossidae again.

In addition, the delimitation and validity of several genera is in need of more research (though much progress has been made in the last years). Namely, how the huge genus Rana is best split up requires more study. While the splitting-off of several genera—like Pelophylax—is rather uncontroversial, the American bullfrogs formerly separated in Lithobates and groups such as Babina or Nidirana represent far more disputed cases.

While too little of the vast diversity of true frogs has been subject to recent studies to say something definite, as of mid-2008, studies are going on, and several lineages are recognizable.

A number of taxa are placed in Ranidae incertae sedis, that is, their taxonomic status is too uncertain to allow more specific placement. Rhacophorus depressus was formerly included in Ranidae, but has since been given its own family.

The subfamilies included under Ranidae, now regularly treated as separate families, are: 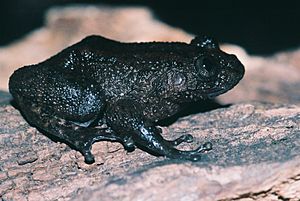 Unidentified Nyctibatrachus from Phanasad Wildlife Sanctuary, Maharashtra: a member of an ancient lineage of true frogs 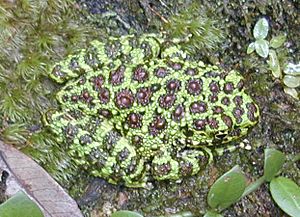 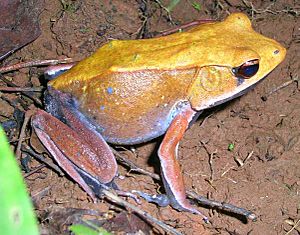 Bicolored frog (Clinotarsus curtipes), related to Meristogenys and Huia proper,
was also formerly in Rana, but is now considered distinct

All content from Kiddle encyclopedia articles (including the article images and facts) can be freely used under Attribution-ShareAlike license, unless stated otherwise. Cite this article:
True frog Facts for Kids. Kiddle Encyclopedia.