Moorook is a settlement in South Australia. It is part of a series of towns surrounding lakes in the Riverland region in Australia. At the 2006 census, Moorook had a population of 289.

The town of Moorook was surveyed in April 1922 on the left bank of the Murray River where it flows north between Loxton and Kingston on Murray. Moorook is just downstream of Moorook Island and upstream of most of Moorook Game Reserve which surrounds and contains Wachtels Lagoon. 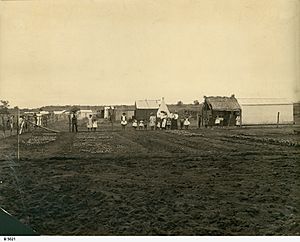 Moorook had earlier been one of the experimental Village Settlements. These were established by the South Australian government under Part VII of the Crown Lands Amendment Act 1893, in an attempt to mitigate the effects of the depression then affecting the Colony.

All content from Kiddle encyclopedia articles (including the article images and facts) can be freely used under Attribution-ShareAlike license, unless stated otherwise. Cite this article:
Moorook, South Australia Facts for Kids. Kiddle Encyclopedia.