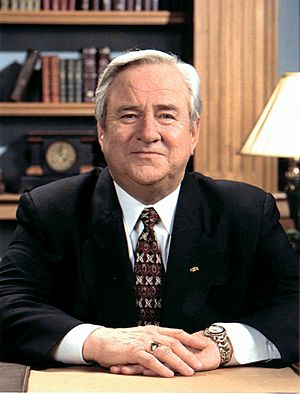 Jerry Falwell, whose founding of the Moral Majority was a key step in the formation of the New Christian Right

The Moral Majority was a political organization in the United States. It was made by Jerry Falwell. It tried to get conservative Christian views into laws by lobbying. It was one of the major organizations of the religious right. It was started in 1979, in response to Roe v. Wade and other events known as the "culture wars". It broke up in the late 1980s. It had four branches:

It broke up during Ronald Reagan's presidency because people did not think that the matter was so urgent. Other Christians also opposed it, as well as many liberal people.

All content from Kiddle encyclopedia articles (including the article images and facts) can be freely used under Attribution-ShareAlike license, unless stated otherwise. Cite this article:
Moral Majority Facts for Kids. Kiddle Encyclopedia.