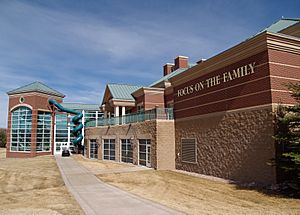 The Christian right (known as the religious right in the United States) is the name for right-wing Christian political and social movements. Though they exist in other countries, such as Canada, it is most commonly used to talk about the United States.

These groups are characterized by their strong support of conservative social and political values. Usually, this comes from a belief that the United States was founded on a strong belief in God, and that American laws and policies should be based on what is in the Bible.

Though members of the Christian right can be from any branch of Christianity, including Catholicism, the religious right is most often used with Evangelical Christians, Fundamentalists (such as Born-agains) and Mormons.

About 15% of Americans say they are part of the Christian or religious right.

People who have been conservative due to their religion have been in the United States for hundreds of years. For example, the people who put John Scopes on trial would be called as members of the religious right. However, the term first came into use in the 1970s by Jerry Falwell.

All content from Kiddle encyclopedia articles (including the article images and facts) can be freely used under Attribution-ShareAlike license, unless stated otherwise. Cite this article:
Christian right Facts for Kids. Kiddle Encyclopedia.