Mordechai Shpigler was born in Asbest, Soviet Russia, and is Jewish. He moved to Netanya, Israel, when he was a boy.

As a striker, he played for Maccabi Netanya along with Paris Saint Germain in France and alongside Pelé for New York Cosmos of the North American Soccer League in the 1970s. 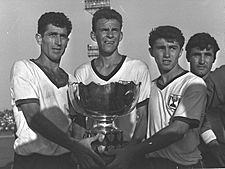 Shpigler made his international debut for Israel on 2 January 1964 against Hong Kong. He took part in the Israeli win in the 1964 AFC Asian Cup, and scored 2 goals at the tournament, which made him a joint top scorer of the tournament.

His major achievement was helping Israel qualify for the 1970 FIFA World Cup in Mexico. He scored Israel's lone goal in World Cup history in a 1–1 draw against Sweden.

His 32 goals for the national team (according to IFA count, FIFA counts only 25 of them) is the Israeli record. Shpigler scored 25 goals in 62 'official' internationals for the Israeli national side, he also played in 21 other 'unofficial' matches (mostly Olympic Games qualifiers) scoring eight more goals.

Shpigler captained the Israeli Olympic team at Mexico City 1968 which reached the quarter-finals, losing to Bulgaria by a draw after the match ended 1–1.

Spiegler was nominated as the best Israeli player of the prior 50 years by the Israel Football Association in the UEFA Jubilee Awards in November 2003. Shpigler is a member of the Education and Publicity Committee of the IFA.

In 2007, he won a lifetime contributions special award for the Israeli national team in the 1970 FIFA World Cup, determined by Yedioth Ahronoth and the Israeli football player association.

All content from Kiddle encyclopedia articles (including the article images and facts) can be freely used under Attribution-ShareAlike license, unless stated otherwise. Cite this article:
Mordechai Spiegler Facts for Kids. Kiddle Encyclopedia.